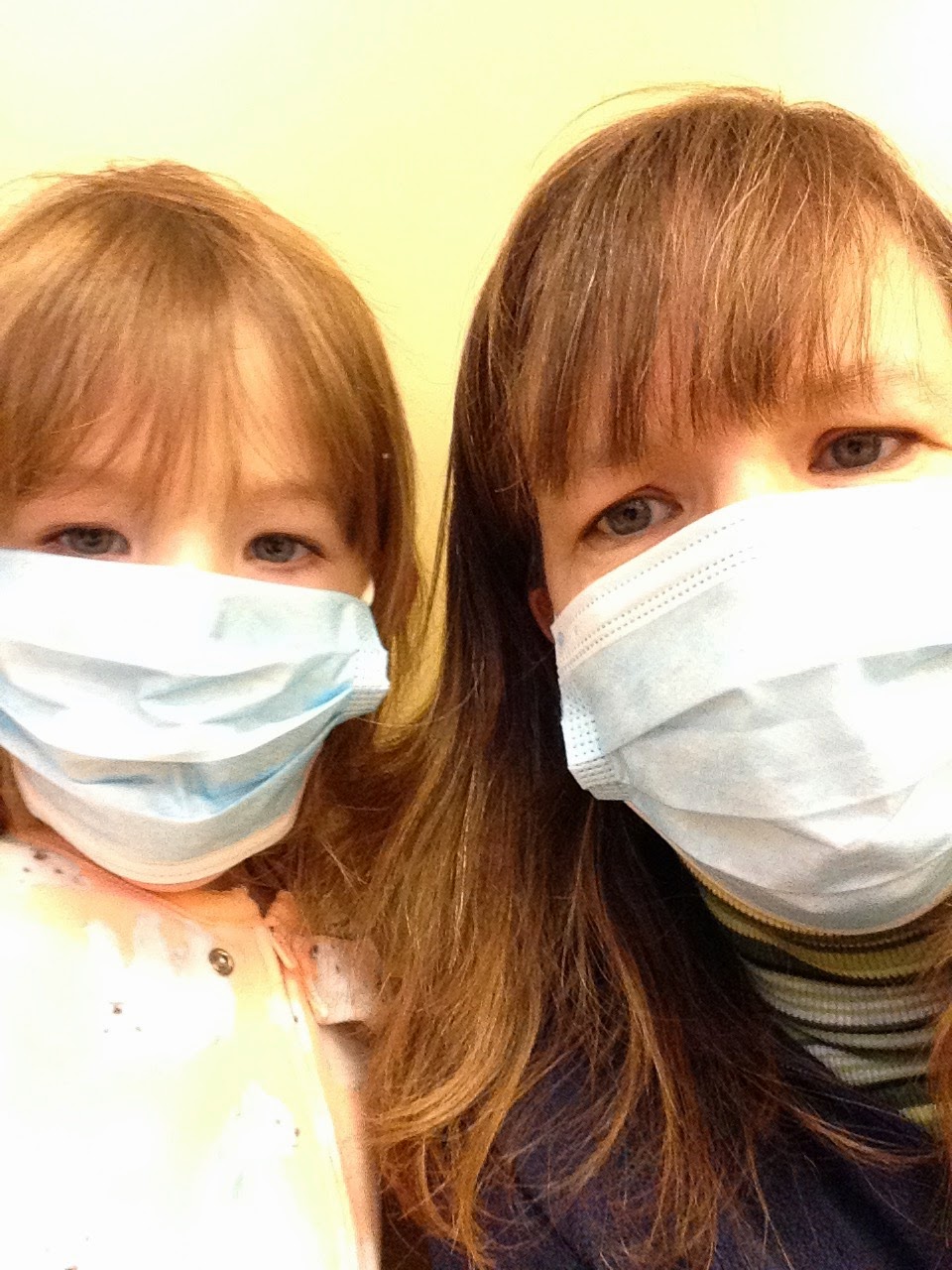 Our New Year's Eve did not get off to a great start. Rachel has had a cold for about ten days but on Wednesday it started sounding worse, so, after dropping Sam off with some friends, Rachel and I headed to the walk-in clinic. The clinic requested that anyone with a cough wear a mask, and even though I wasn't sick, there was no way Rachel was wearing a mask, if I wasn't.

Thankfully, she was only diagnosed with a post-viral cough (as opposed to something worse), and after getting a prescription for some inhalers, we were off.

We've had plans the past few years with a group of friends who live about an hour and a half away from us, and this year, Dave and I decided we needed to find some ways to celebrate New Year's closer to home. Our plan was to go to our public square for their Family New Year's celebration with fireworks at 9pm. That felt pretty do-able.

Unfortunately, neither kid was into eating supper, nor were they into listening. Dave was tired and starting to feel a little sick, but I love New Year's and I really wanted to do something celebratory, so off to the square we went. 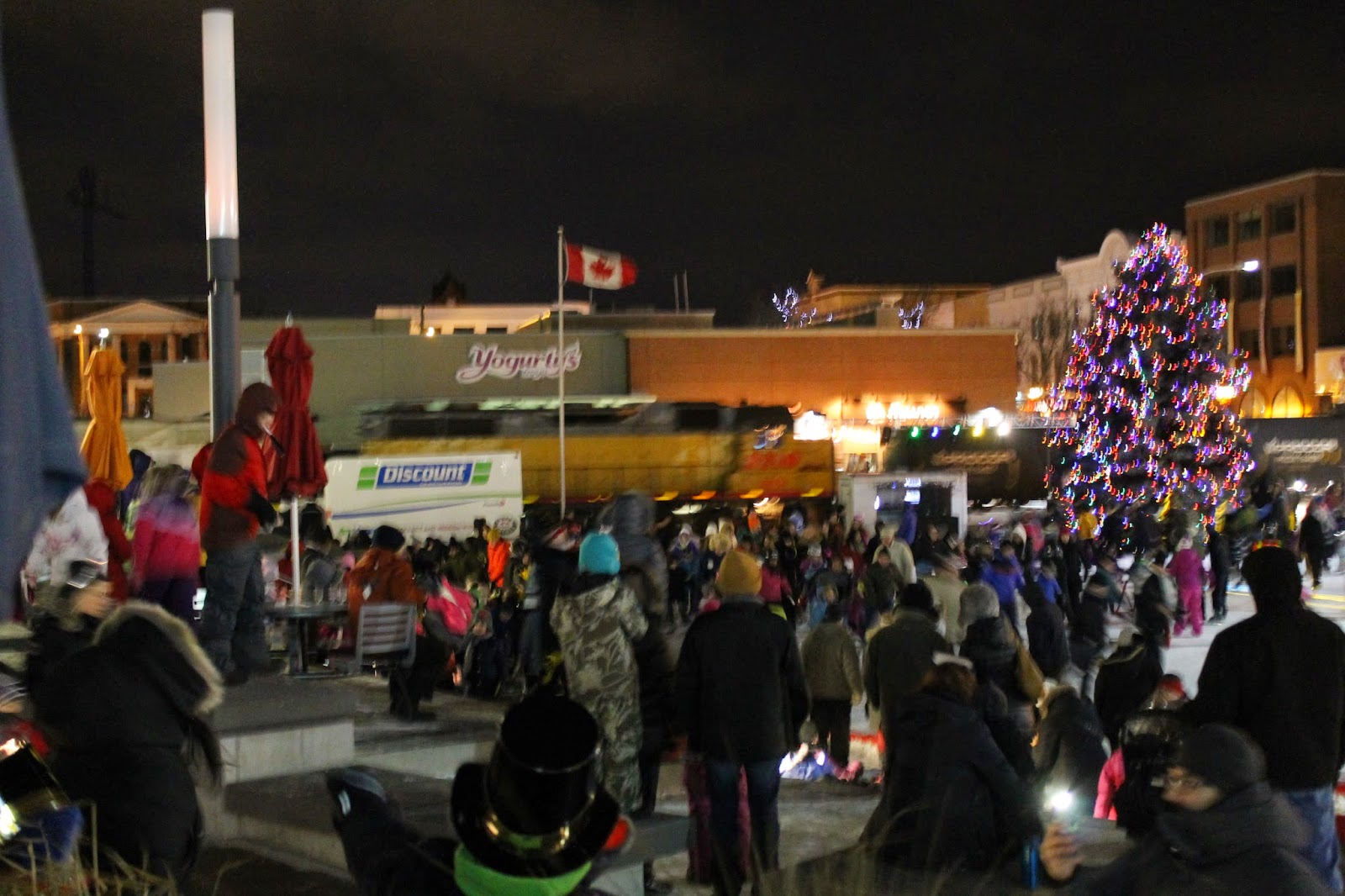 There was also skating but we weren't attempting that.
We picked up our hats, "champagne" (ginger ale), noisemakers, and we were set. Unfortunately, Dave and Sam got cold and wanted to leave before the fireworks started. Boo. To be fair, it was pretty cold out, but I was willing to tough it out for a few more minutes.

Eventually we did find a parking lot and watched a few fireworks. 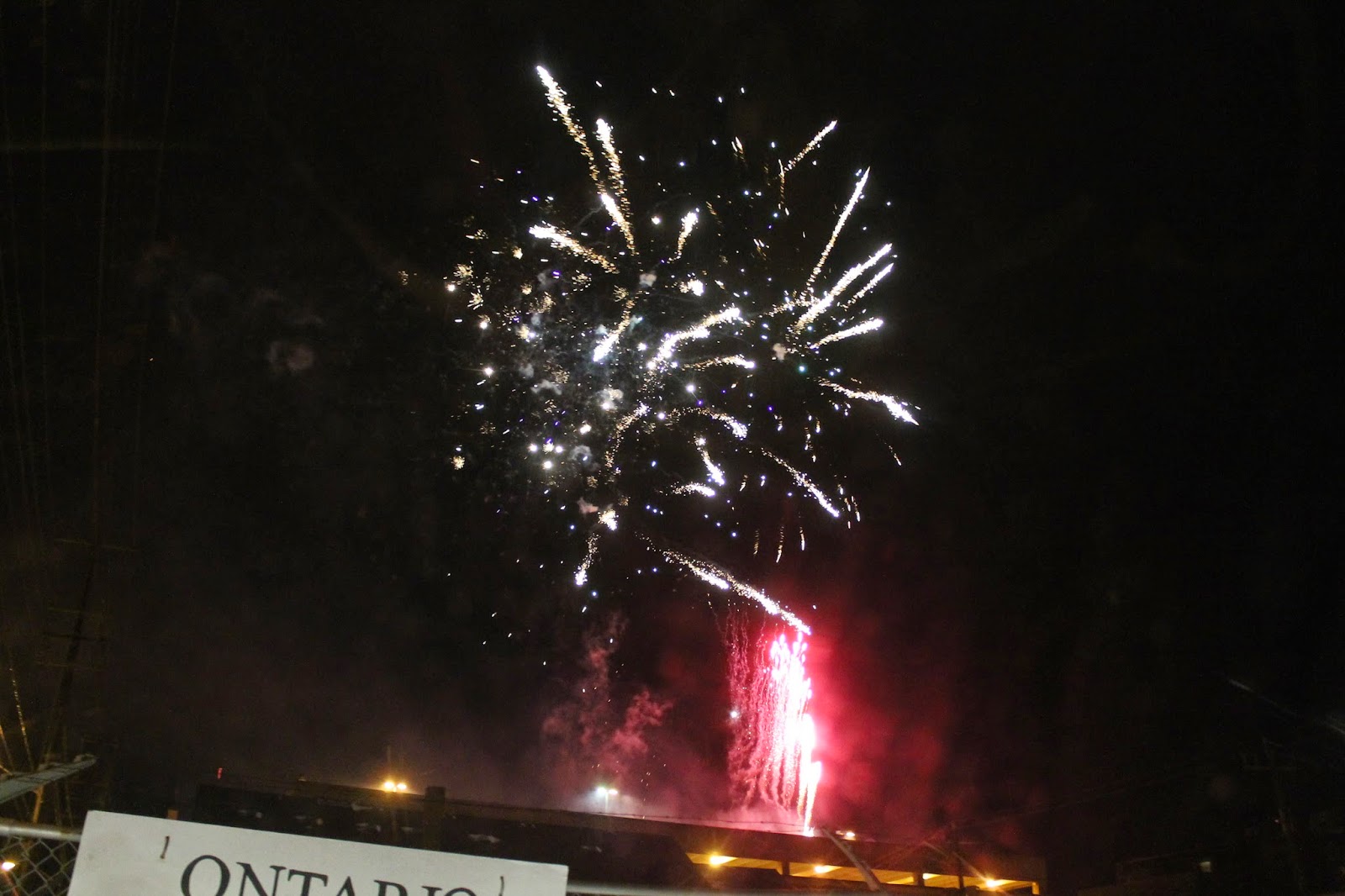 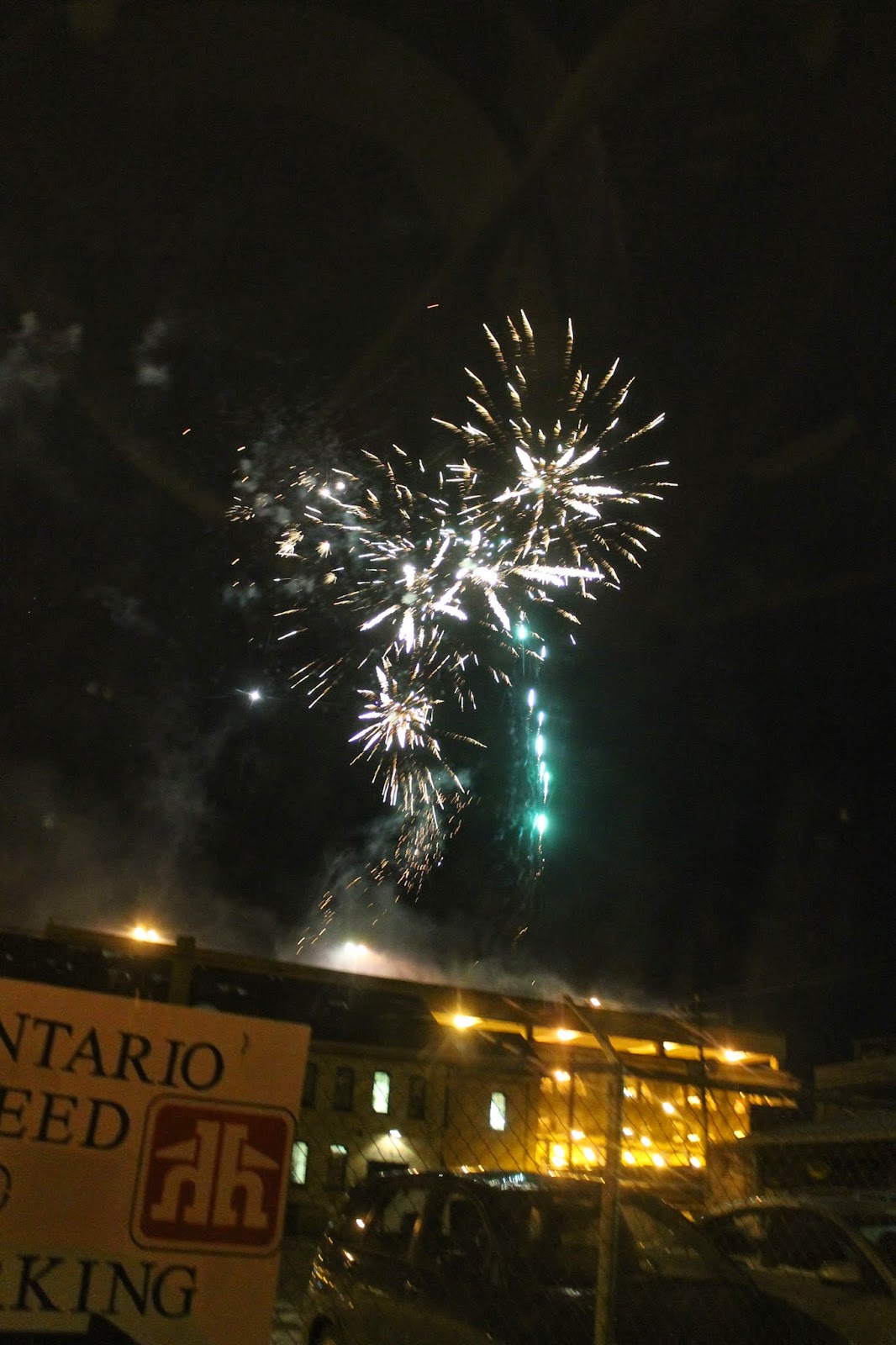 And then we all went home and were all asleep by 11pm.

However, yesterday was a whole different ballgame. Rachel was feeling much better, Dave and I were better rested, and I had a new tradition to prepare for. First of all though, there was champagne for breakfast. And by "champagne" I mean sparkling peach lemonade. And there were party hats. Or tiaras! 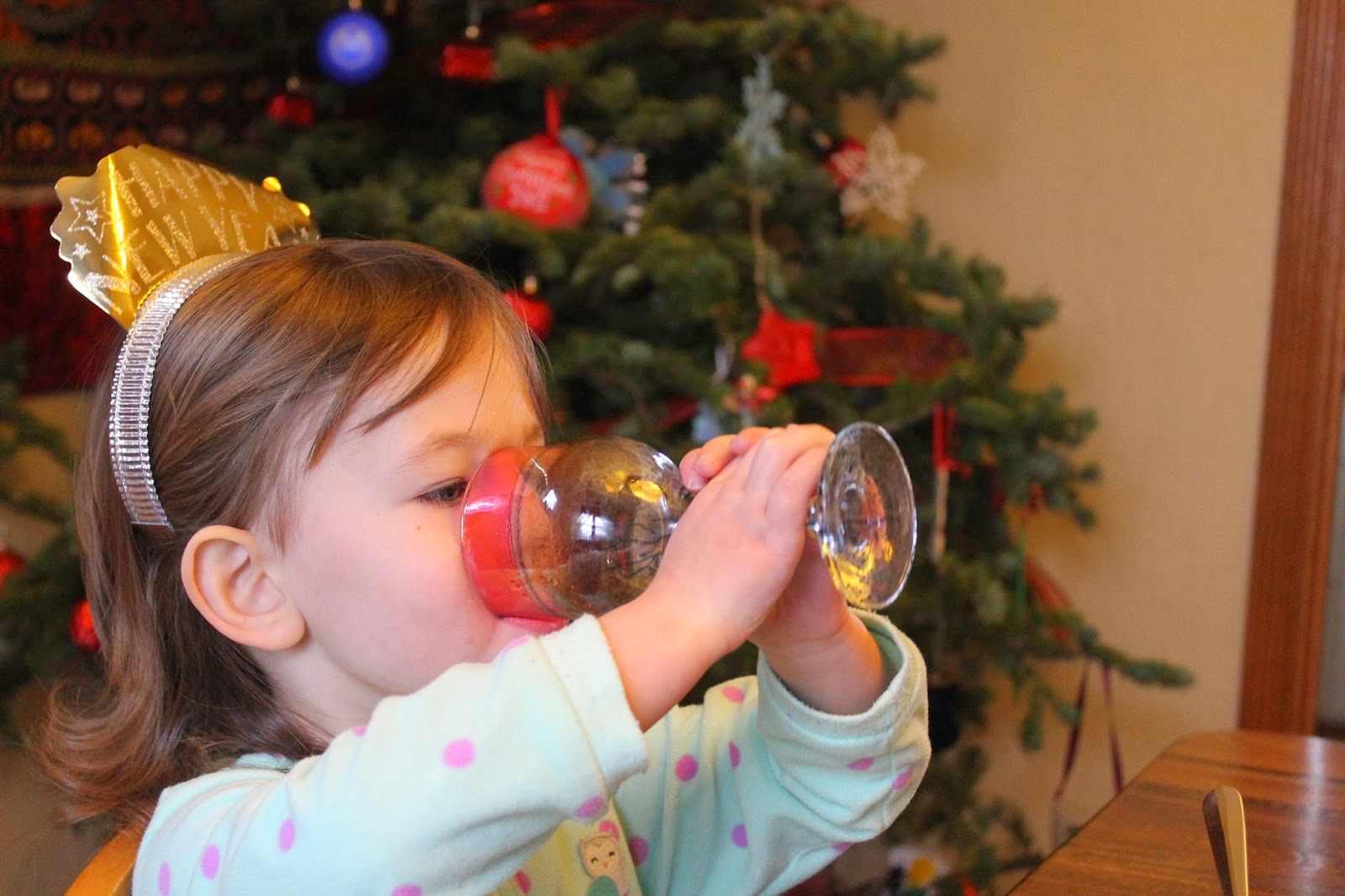 About a month ago, my friend Shirley mentioned that she would be running in the Resolution Run. I hemmed and hawed about it, especially since I had never run 5K before. But then on Christmas Day Dave and I went for a run and I wasn't embarrassed about my time. And, except for three hills we won't talk about, I ran (and by "ran" I mean "jogged") the whole thing.

I still hemmed and hawed a bit, but eventually signed up. To run 5K. Outside. On New Year's Day at noon. In -6C (21F) weather. Or -16C (3F) with the wind. And, yes, there was wind. I didn't tell anyone I was running (except my parents, Dave, and Shirley), because I didn't know if I would actually go through with it. Maybe I was secretly hoping I would come to my senses! Me, pre-run. I wasn't sure how to dress to run in cold weather, but I knew I didn't want to wear a toque because I thought my head might get too hot. So I wore Sam's neck warmer as an ear warmer. It worked well, even if I did look a little stupid.

Since the finish line was outside, I told Dave not to bother bringing the kids out to watch me finish. But he and the kids surprised me and were waiting inside after I'd finished running. 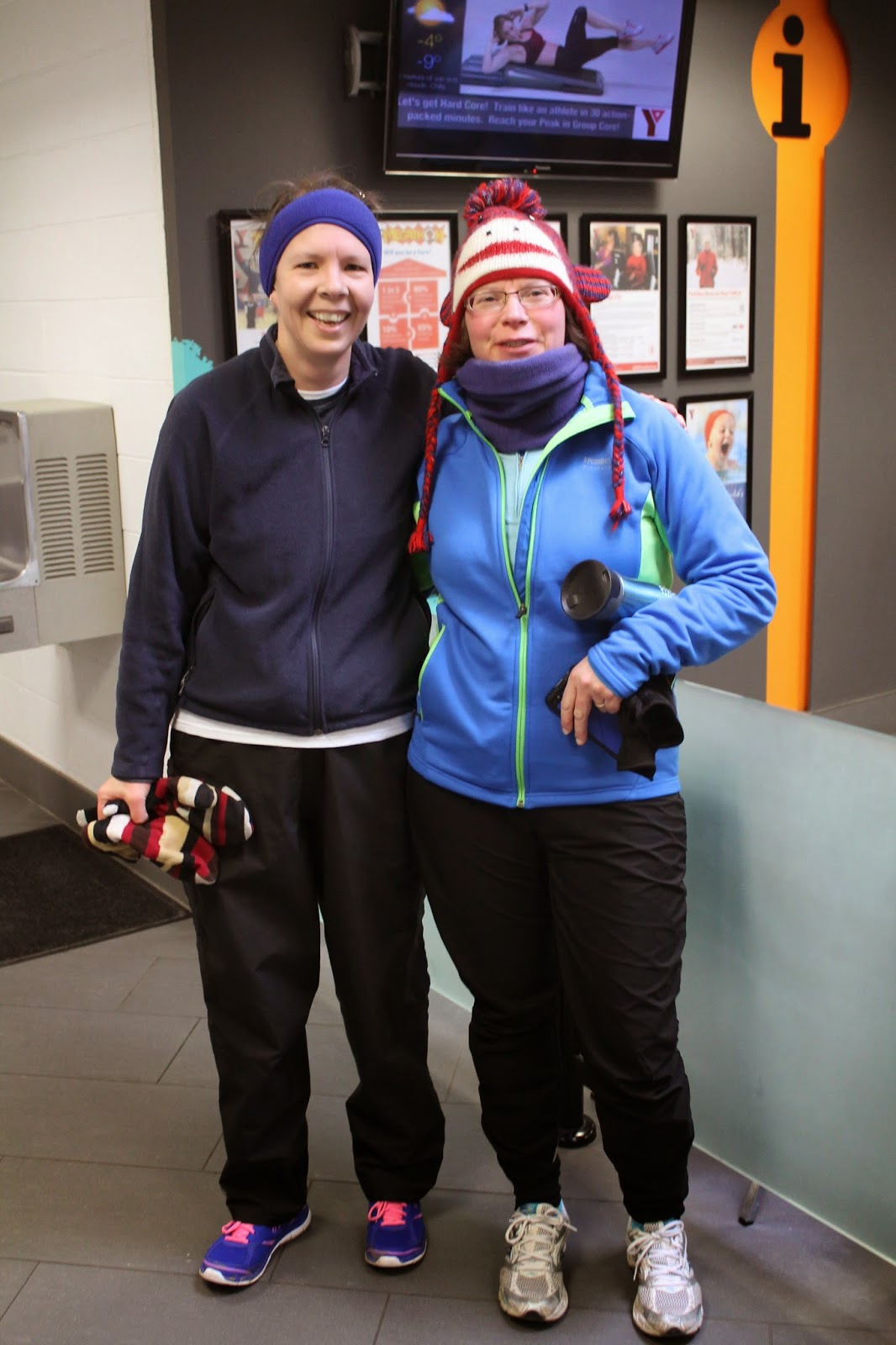 Shirley and I, post-run. We finished in 38 minutes which I was really pleased with, especially since I walked quite a bit of it. I got a lot more tired running in the cold. 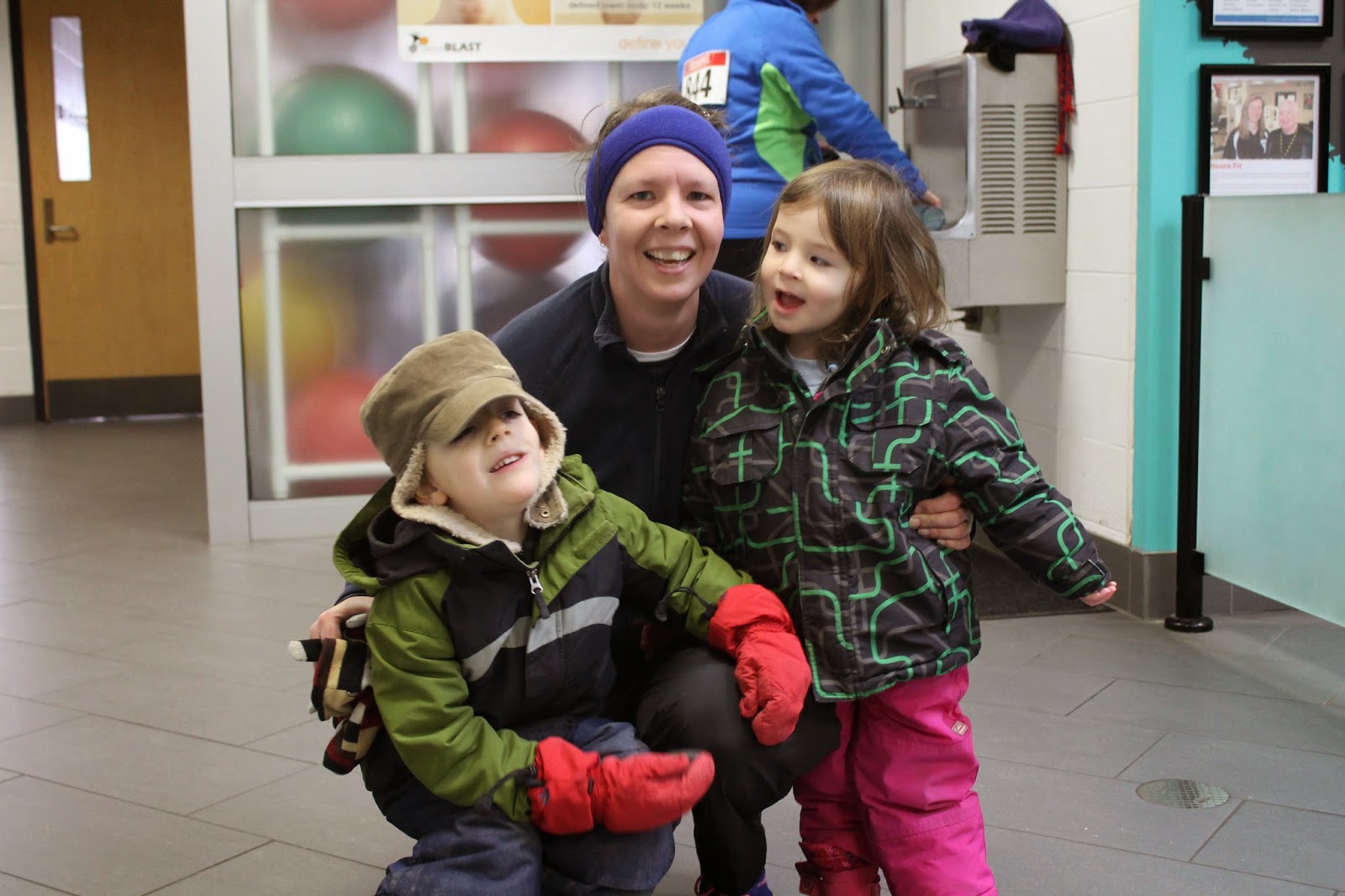 Me, with my support team. Ha! 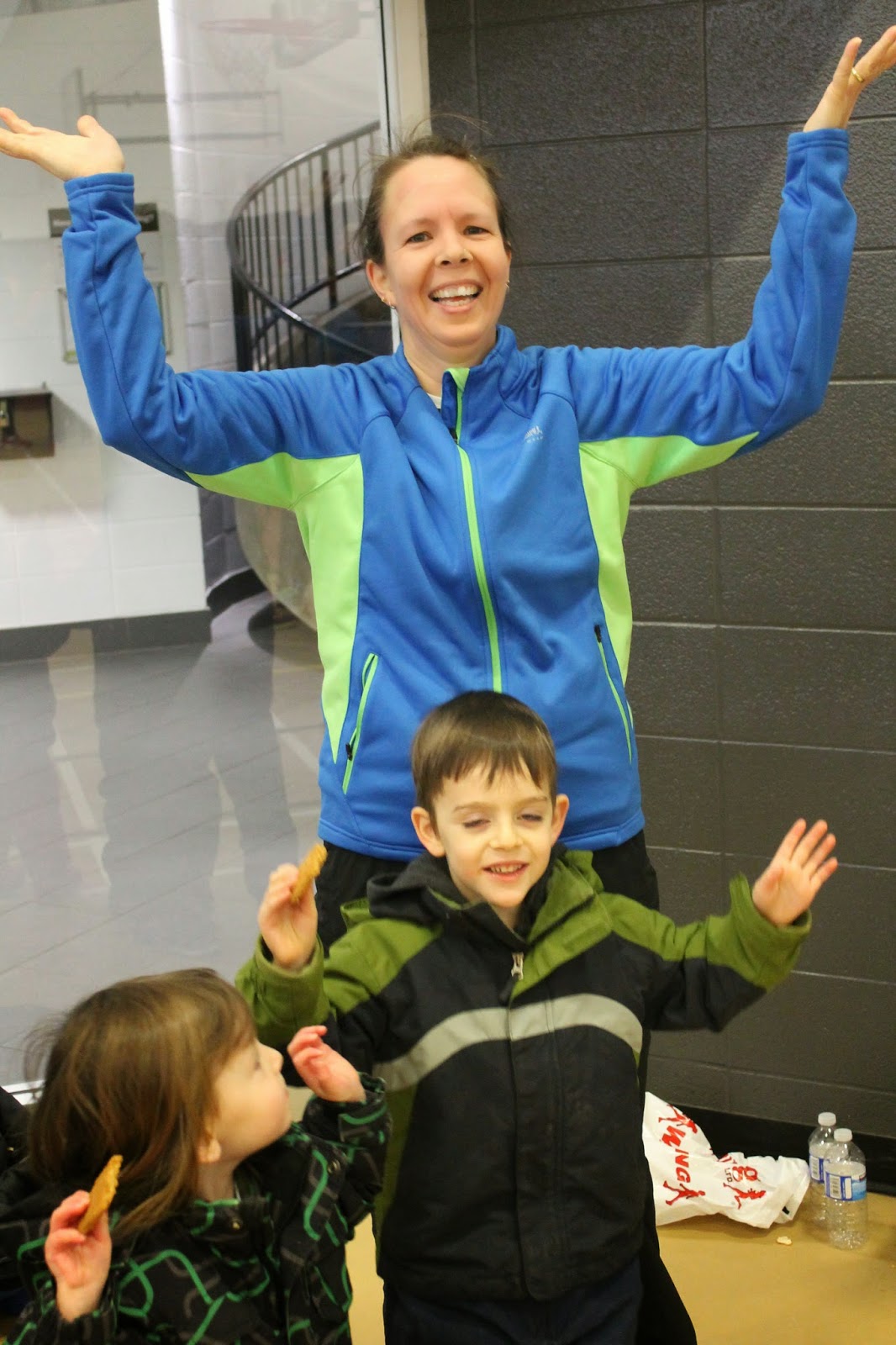 Since I signed up late, I didn't get a race run jacket right away. I was originally told I wouldn't get it until mid-January, but as I entered the gym after my run, a volunteer sitting at a table said, "Natasha, we have a jacket for you." I still have no clue how they knew my name! So I had to get a post-run victory photo with my jacket.

Then I came home, had the world's longest, hottest shower, and a two hour nap.

It might be a little insane, but I'm already looking forward to next New Year's. I think we'll try the celebration in the square again, and I definitely want to do the run. I might even try to run the whole thing next year. Yes, even the two long hills I walked yesterday. After all, I have a whole year to prepare for them.
Posted by Natasha at 08:12

Labels: Celebrating Holidays, Kruisin' KW, Parenting, Rachel, We Are Healthy (Or Not)