So as I declared in my photo a day post earlier this week, I am going to try and blog about our Disney Cruise. Spoiler alert: We had a BLAST and would love to do another one :) Also spoiler, I am trying to be as detailed as possible for anyone who may be considering doing this themselves. I apologize for the length of this post -- I didn't know where to break it into two posts.

The back story is that we had talked about going to Disney World with a friend of ours and her son. At some point I found out about Disney Land & Sea vacations where you can visit the parks for a few days and add on a cruise for a few days. I've never cruised and have always wanted to, so I was trying to sell that option.

However, as we discussed it more we realized our kids all hated rides so we started to question why we were going to the Disney parks with kids who didn't want to go on rides. In the end, we decided just to do the cruise part. And I really do think it was the right decision for us.

Given our brutal winters, we decided to book it as a January-February getaway. We cruised on the Disney Magic and did a four night Bahamian cruise. One thing I was sad about is I would have loved a day "at sea" however that wasn't an option for this cruise. Next time, I would make sure we had at least one day at sea, if not more. Okay, on with the (many) photos and stories about the actual cruise. 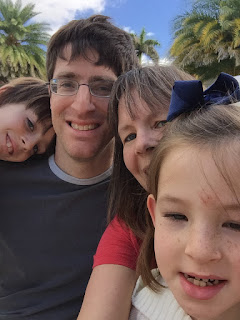 Our cruise left from the port in Miami so we flew to Miami the night before and stayed in a hotel. We had been planning on taking public transportation to the port but since I was just recovering from the flu, we paid extra to take private transportation from our hotel to the port. But first we had to take a family selfie under a palm tree as we were enjoying the warmth. 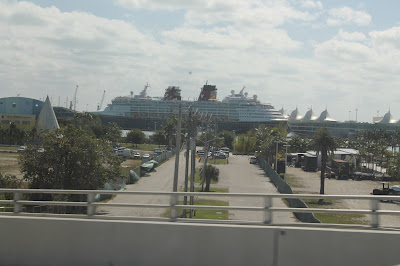 This is not the best picture but it was our first view of our ship. This picture was taken from the van window. 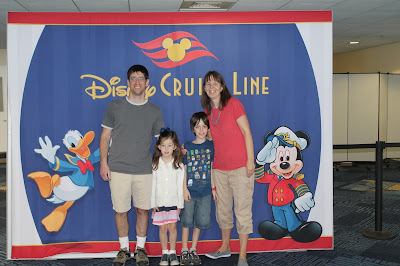 Look at us! We're going on a Disney Cruise! Wheeeee!
This was taken past the port security but before we boarded the ship.

You book a port arrival time and we arrived about ten minutes before our time. We checked our bags outside and then went through security and lined up for our Keys To The World. This is a plastic badge each person receives and it is basically used as your ticket during the whole cruise. It's how you buy things, how you get on and off the ship, how you check your kids into (and pick them up from) the kids' clubs. It's very important.

Then we walked through the boarding terminal and basically right onto the ship. I would say from the time we arrived at the port until we boarded the ship was about half an hour and we were moving the whole time. There was rarely any waiting or a line longer than five minutes. 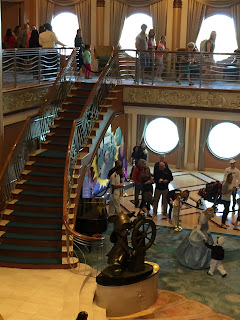 We boarded the ship on a deck which led us into a staircase above the main atrium. We were asked our family name and then someone announced, "We welcome the SMITH* FAMILY aboard the DISNEY MAGIC!" and then everyone cheered and you walked through a gauntlet of about fifteen Disney employees who all clapped and cheered. It seemed really cheesy until it was our turn and I got all teary eyed. Ha! *not our actual name :) 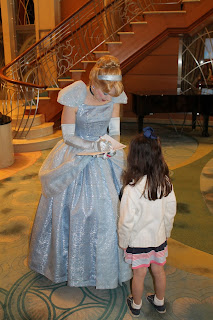 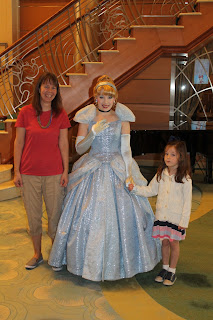 Every day we received a flyer called The Navigator which you could also access on the Disney Cruise app. The Navigator explained what was going on everywhere each day. So you could see which movies were being shown on the Funnelvision and in the theatres, what was going on in the kids' clubs, and most importantly, which characters were going to be where and when. The longest we ever waited in line to see a character was about twenty minutes (most lines were ten minutes or less) and I was so impressed that the characters interacted for so long with the kids -- we never felt rushed through a character meeting.

I was soooo excited that after we boarded the ship, we randomly ran into Cinderella in the atrium. We didn't have a Navigator yet or the Cruise app loaded so it really was happenstance. Fun fact: I dressed up as Cinderella for Hallowe'en the year I was in Grade One. She has been my favourite princess for a very long time. 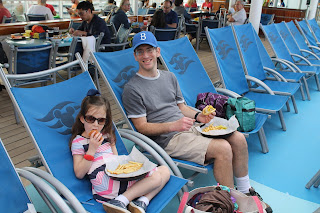 Our staterooms weren't ready right away so we headed up to the pool deck for lunch and to hang out. There were a HUGE variety of food options -- as a vegetarian I never suffered for lack of food -- and the kids loved the open ice cream station. 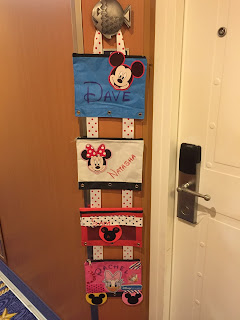 This was outside our stateroom. On Disney cruises there is something called Fish Extenders. Our friend found the private Fish Extender Facebook group for our cruise. We signed up to be a part of the group. It's basically like a secret Santa for your cruise. We made our Fish Extender (see the little fish it's hanging on -- thus, the name) and little gifts for the people in our group. We had nine families in our group. For the first two or three days, every time we came back to our stateroom, there were little gifts in our pouches.

There was also something called Pixie Dust, which is when people randomly leave you gifts, even if you aren't a part of an official group. Through the Facebook group about twenty families gave their stateroom numbers for targeted Pixie Dust.

I think my favourite Fish Extender/Pixie Dust gifts were a cup with "Disney Magic 2018" on it which I could use over and over again at the drink stations and some of the personalized magnets we received. We also really enjoyed the glow stuff and pirate stuff on Pirate Night. Rachel loved a pair of Frozen socks and a Frozen washcloth which she received. Sam loved a word search book he received and toppings to spice up the free ice cream. Dave received a wireless speaker which he has used a ton at home.

I have to say that Dave thought the Fish Extender was a bit silly but I talked him into it. I think it was one of our favourite parts of the cruise. We just loved coming back to little treats all the time. The kids would gleefully check out their stuff. And we had a lot of fun delivering our gifts to all the staterooms we had on our lists. If you want to know more about Fish Extenders, check out this article. 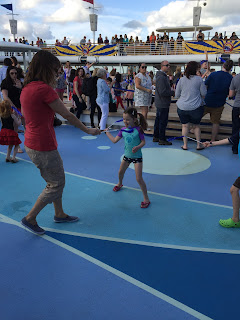 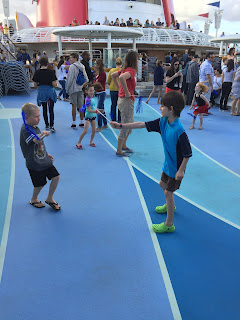 Our cruise (and I think most Disney Cruises) started with a SailAway party. We went to the pool deck and they were handing out blue streamers. We all danced around. At one point, the kids were invited up on the stage to dance. We LOVED this party. They played great music and we had so much fun! (And in the top right picture you can see me hitching up my capris. Although I hated having the flu right before we left, Dave commented that if you wanted to lose weight before your cruise, it was a very effective way to do it. By the end of the cruise, I'm pretty sure I'd gained all my weight back. Ha!) 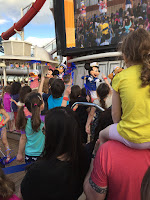 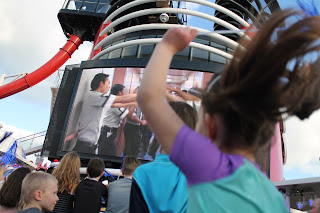 I love how Rachel's ponytails are flying in the picture on the right. She was anticipating the horn blowing and wanted to hang out in our stateroom for hours until after we had set sail. We convinced her to go up on the deck and she ended up having a BLAST! And while the horn was loud, it didn't blow all that often, thankfully. 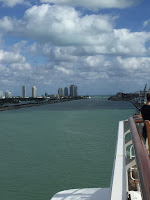 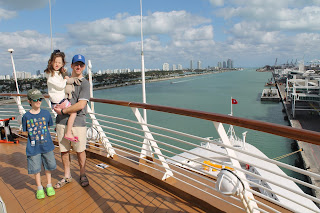 After the ship had set sail, we went to the front (I know there's a proper name for it but I can't remember it right now - ha!), and took some pictures. The only time I could really feel the motion of the ship was at dinner the first two nights and in the theatre the first two nights. I think it was because the restaurants and the theatre were near the bottom of the ship (Deck 4) and right at the front and the back. Other than that, I never really felt it when the ship was sailing. And the kids were complete troopers about the whole thing. 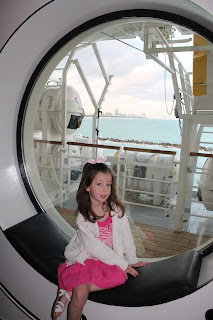 Rachel dressed for dinner, on her first cruise!

We never had to dress up for dinner but we enjoyed getting a little fancier each night. Supper our first night was at Animator's Palate, which I had read about and was really excited to eat there first. Supper each night was at one of three different restaurants. We were assigned servers, a table number, and a dining rotation. Our servers rotated with us through all the different restaurants and got to know us well.

Animator's Palate starts out as black and white. There are screens on the walls which "draw" different Disney characters. Then after the main course is finished, Mickey comes out, the whole restaurant switches to colour, and it's just really fun. 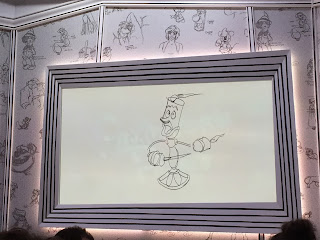 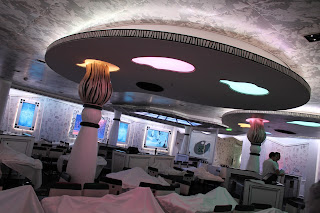 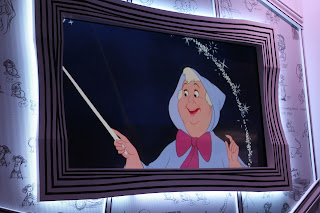 After dinner every night there were dessert options. Sam loved the Mickey ice cream bars. 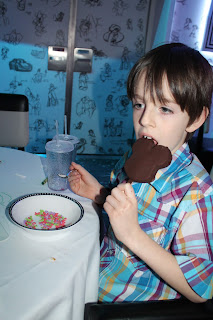 After supper we randomly ran into Belle... 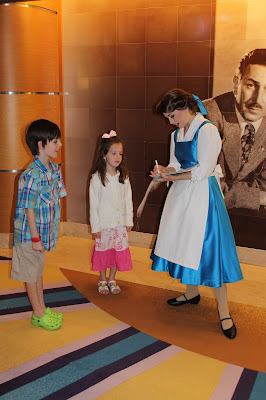 ...and then we met Mickey. He was all ready to captain our ship. 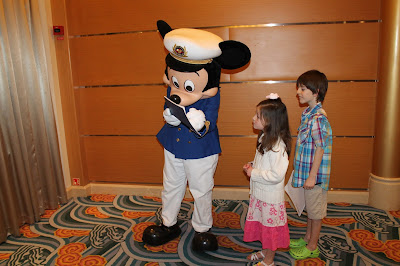 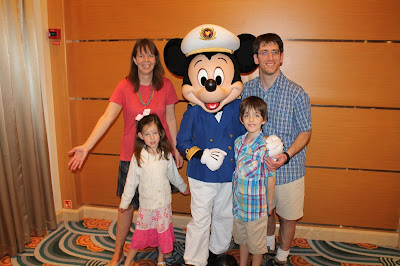 Every night after supper there was a musical which was produced especially for the cruise. The first night we saw, Twice Charmed, which was based on the Cinderella story. Unfortunately, you weren't allowed to take pictures in the theatre so I don't have pictures from there :( 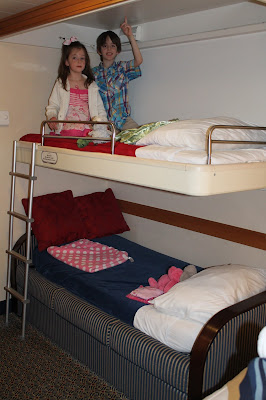 After the first show, we went around and delivered our Fish Extender/Pixie Dust gifts. And then we went to bed. Sam loved sleeping on the top bunk and Rachel liked to sit up there with him whenever she could.

It was a very full first day and we were more than ready for bed.