A Baseball Kind Of Birthday (And Recovery Update)

Recovery Update: Sam slept for about eight hours last night and was the first one awake this morning. He says he has no pain and is happily playing Minecraft on the iPad. Last night we just watched a lot of baseball, both past and current. I see more of that happening today, and since I'm completely exhausted, I'm good with that. Thanks again for all your prayers and support. 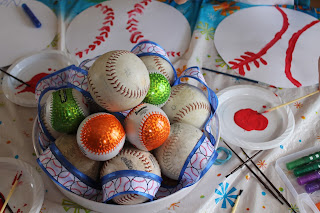 On Saturday we celebrated Sam's birthday with his friends. The theme, of course, was baseball. We had assumed, since his party was in the first week of April, that we could play baseball outside and set up the trampoline for kids to jump on, so we let Sam invite a bunch of kids (eleven, to be exact). 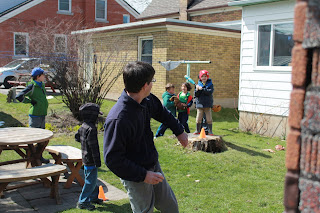 And then we got hit with an unusual cold snap and playing outside all afternoon was no longer an option. So I called on Pinterest and a couple of friends, and at the last minutes (Friday night), threw together an indoor party. 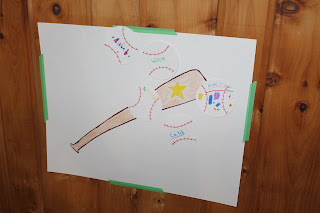 Can you hit a homerun?
(ie pin the baseball on the star)
Let's just say next time we host an indoor party we're inviting fewer kids! Ha! 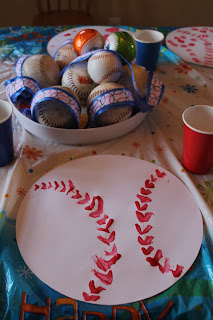 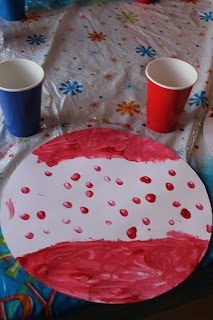 We made baseball place mats (Sam, left, and Rachel, right) as pictured above. The idea was that the seam would be made out of the kids' fingerprints but I was surprised how few kids wanted to get their fingers full of paint so we hauled out the paintbrushes. 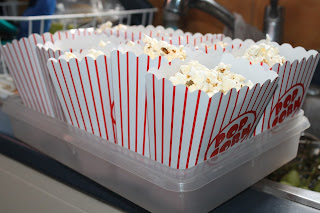 Tim and Willem came to help out, which was awesome. (Trust me, get friends to help you corral kids at their birthday parties. It's the best idea ever!) Tim graciously signed into his TV account so we could live stream a bit of the baseball game being played that day. We served popcorn, which was an excellent idea from a friend of mine at the kids' school. The fruit was supposed to be in the shape of a ball diamond but the kids ate it so quickly, I don't know if they noticed! 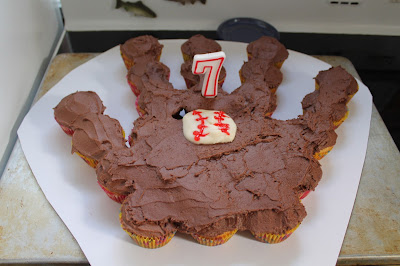 Sam was thrilled with the cake, and honestly, so was I! Sometimes I do a half decent job at recreating things I find on Pinterest, and sometimes I can't. Ha!

The main thing about the party was that Sam LOVED it and I think his friends had a good time, so we're calling it a win.
Posted by Natasha at 08:06

Labels: All About That Base(Ball), Birthdays, Pinterest Projects, Sam, T&J&T&W, We Are Healthy (Or Not)