About fifteen years ago, my friend Alissa e-mailed me and asked if I'd like to be a part of a women's group. At the time we were all women who were, whether by choice or not, single and had been pursuing unusual lifestyles. Lifestyles that didn't lend themselves well to permanent relationships. Alissa was studying to be a pastor, I had just returned from my human rights observation work in the Middle East, three of the women were volunteering or working overseas -- let's just say none of us were settling down anytime soon.

Eventually there were about seven of us who started e-mailing back and forth about once a month. For the past fifteen years I've been sending e-mails to Jodi (who's been in Arizona and Winnipeg, Manitoba), to Esther (who's been in Africa and Pittsburgh), to Carmen (who's been in South America and Chicago), to Alissa (who's been in the US and Canada), and to Susan (who's been in Hong Kong and Ontario). 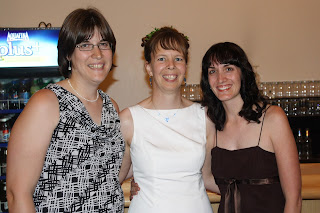 Alissa, Susan, and I at my wedding.

We call ourselves "SOS" which stands for "Sisterhood Of the Scattered" and even though we are now all in North America, it is still hard to meet up. Some of us are now married, although I am the only one who has kids.

We haven't sent as many e-mails to each other lately, which makes me sad, but we are still connected. So Esther (in Pittsburgh), Carmen (in Chicago), and Jodi (in Winnipeg, Manitoba), after writing to each other for almost fifteen years now, I really want to meet you someday.
Posted by Natasha at 08:47