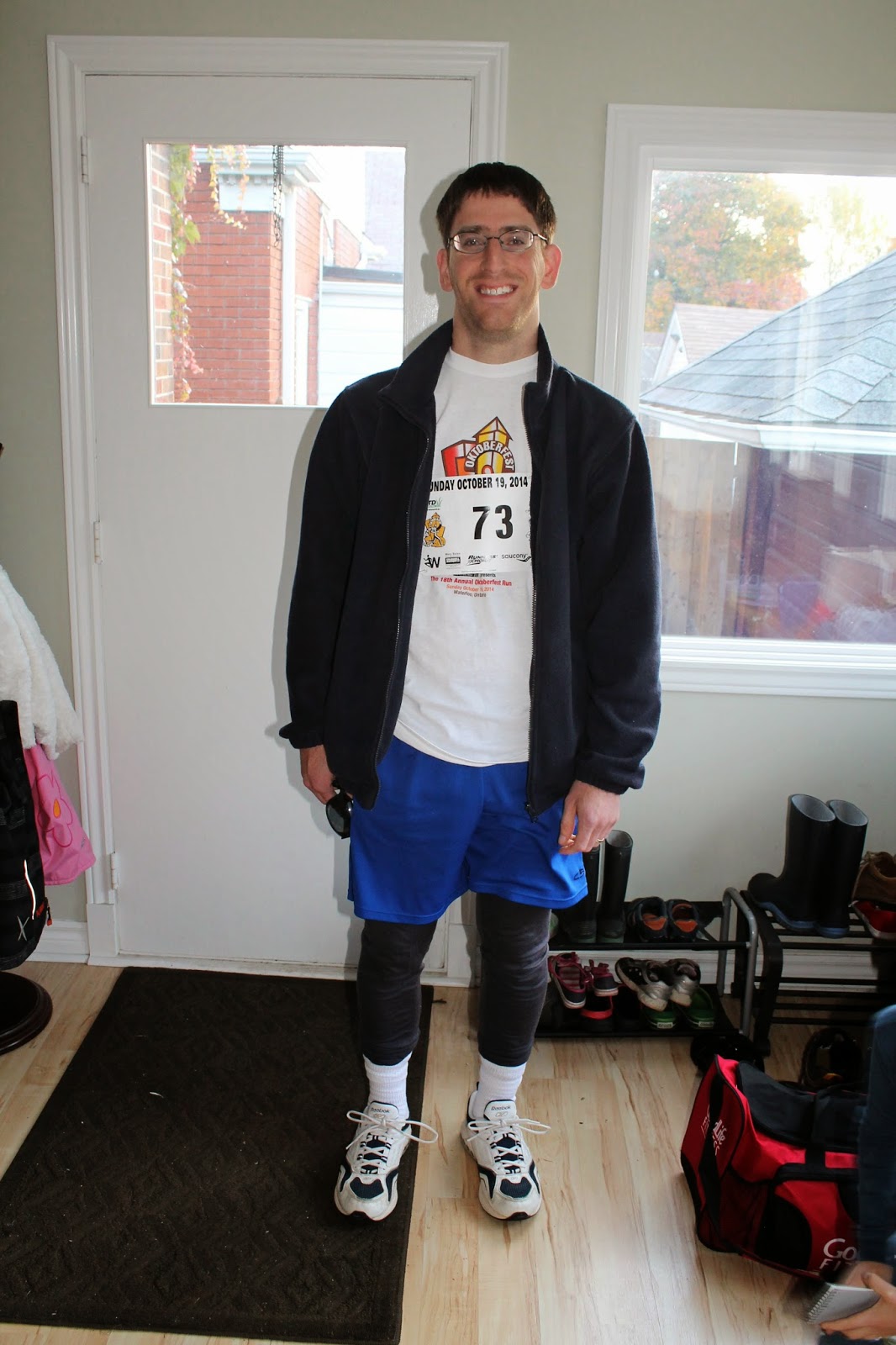 Dave ran a 5K this past Sunday. This is the second one he's done and I'm so proud of him. 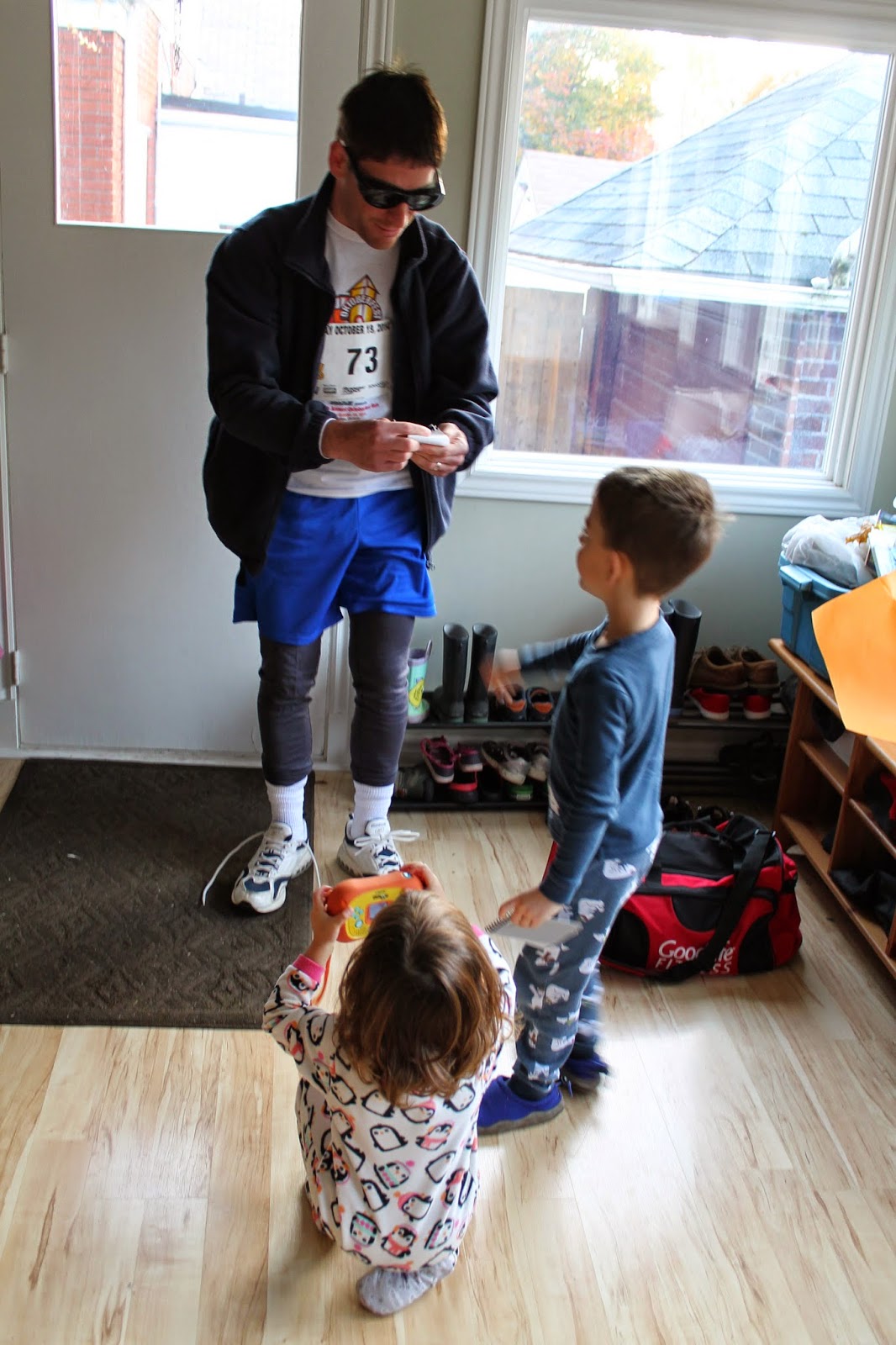 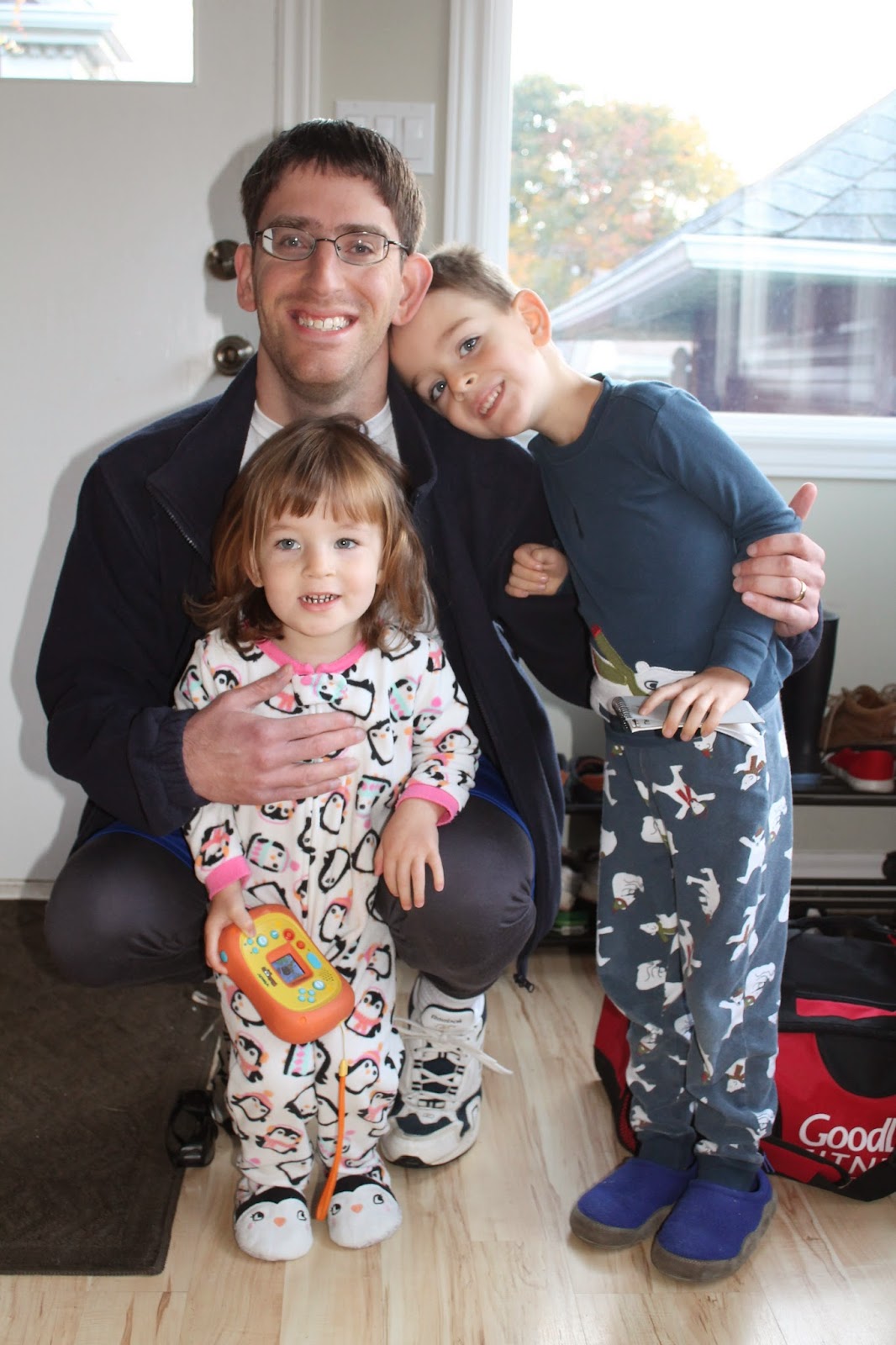 Rachel wanted to make sure that Daddy's event was well documented, and Sam helped out by writing Dave's bus number on a piece of paper and giving it to him so he "wouldn't forget!" 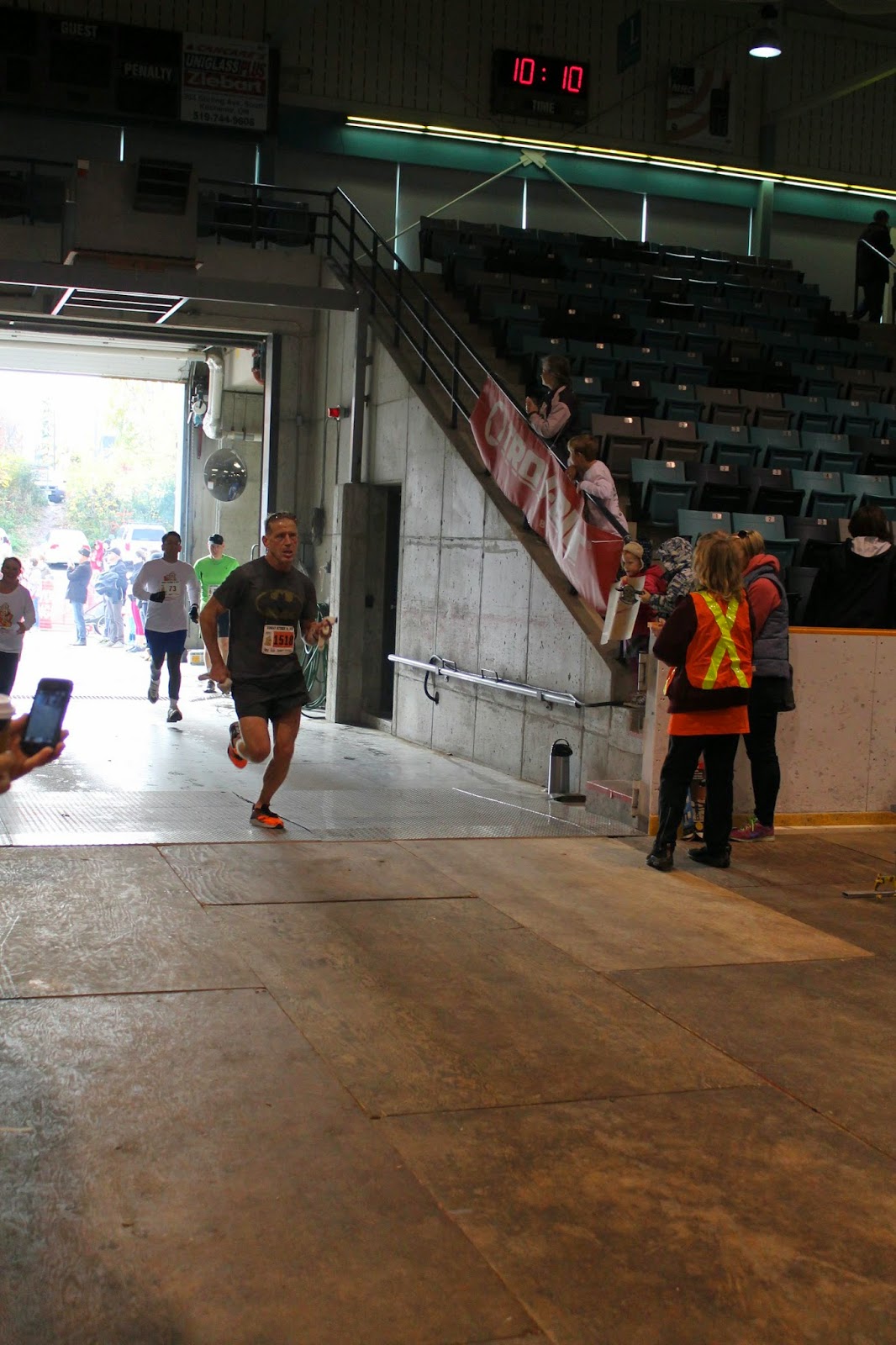 Our first glimpse of Dave heading for the finish. He's the runner on the right, wearing a white shirt, running past the guy in the bright green shirt. 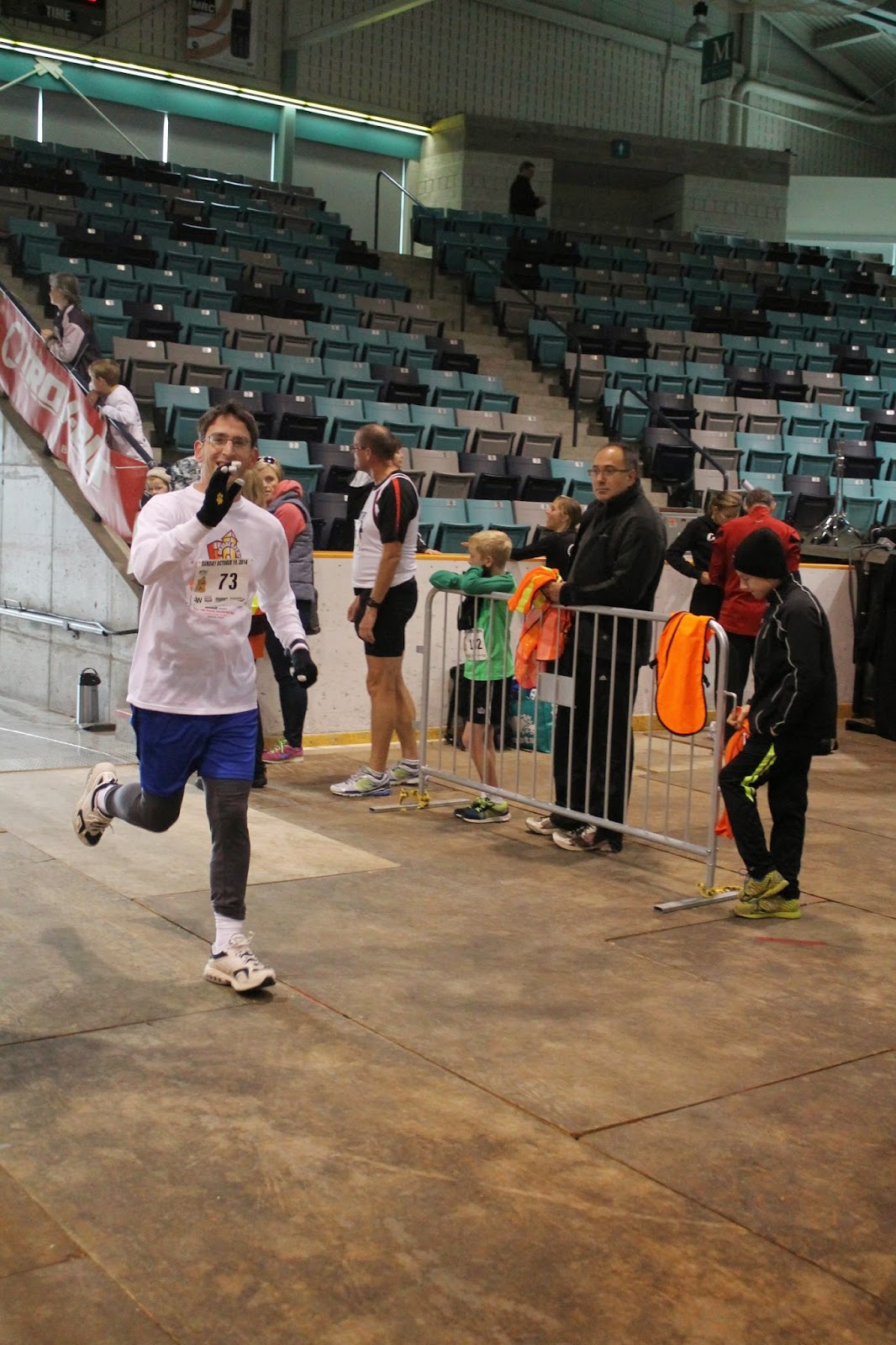 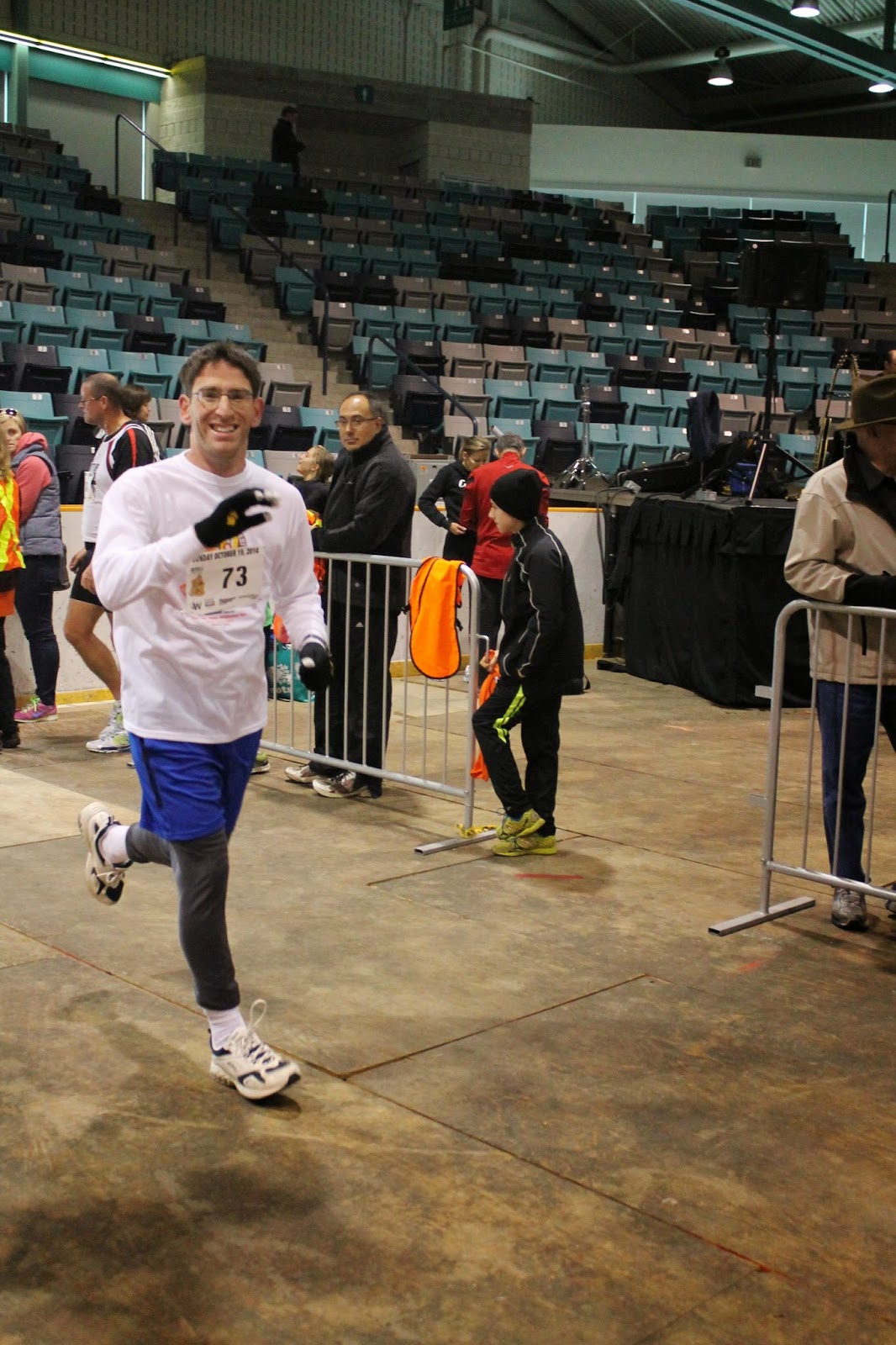 Dave sees his cheering fans. The kids (with some help from me) made a sign which said, "Go Daddy!" and was beautifully decorated. Sadly, I got no pictures of the sign. Also, I was very thankful for the man who offered to hold Rachel so she could see Dave while I took pictures, one handed, while also holding the sign. Sam was holding himself up on the barricade so couldn't hold the sign. It was quite the balancing act. In other news, does anyone want to come be my race support next time Dave does a 5K?! :) 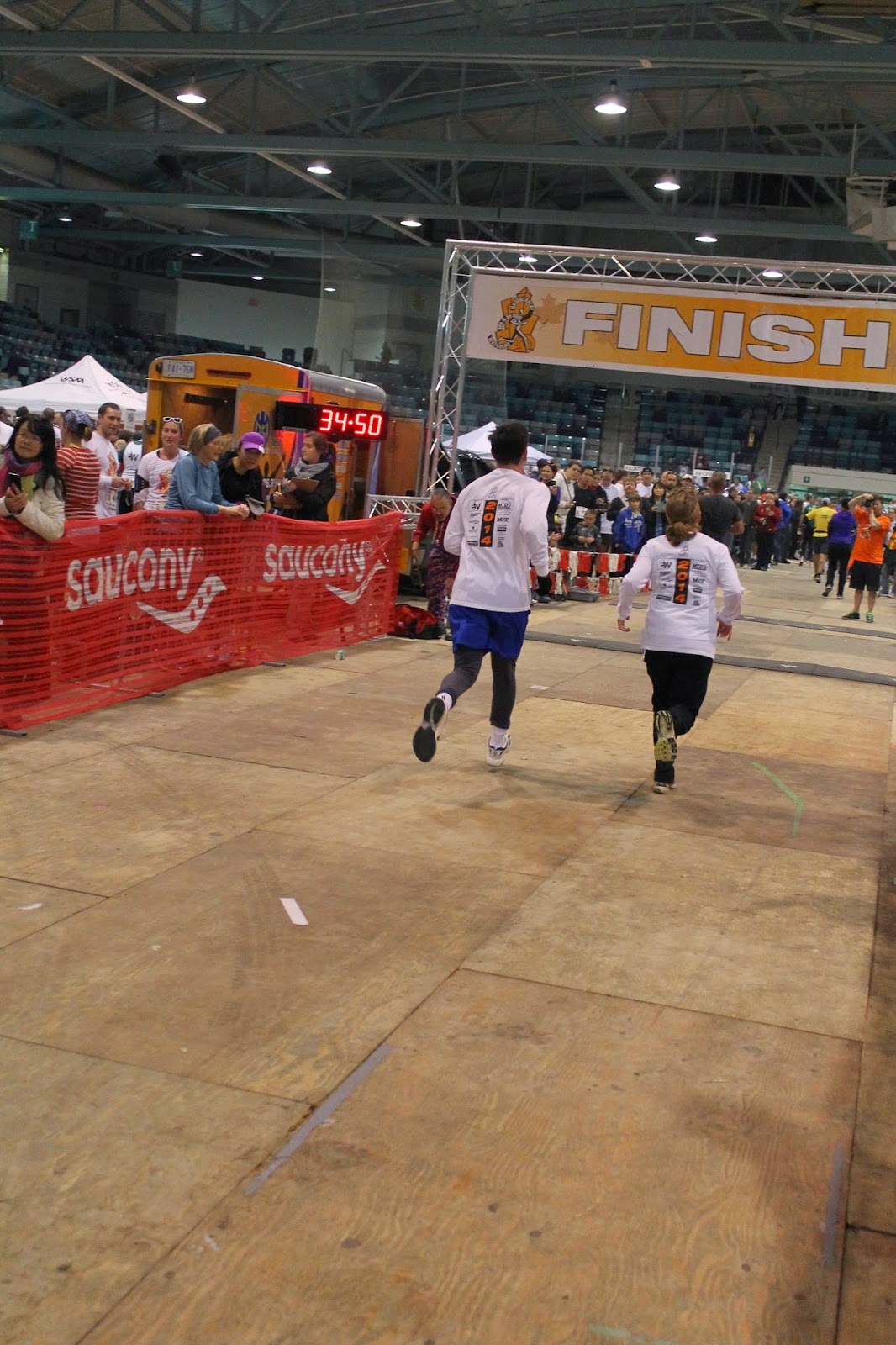 Dave races to the finish. The woman he is running with is a friend of mine and they found each other early on in the run and ran the whole way together. 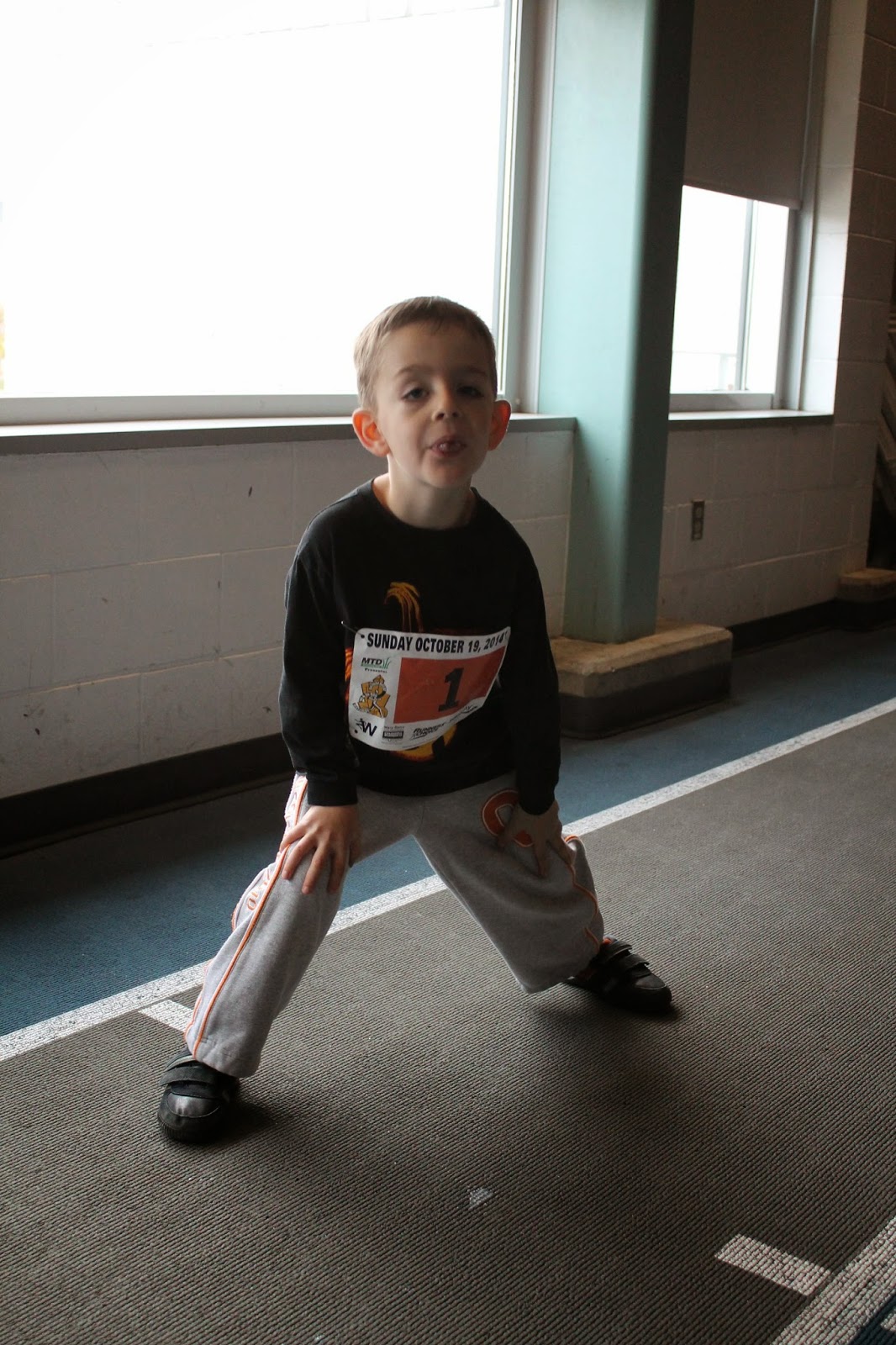 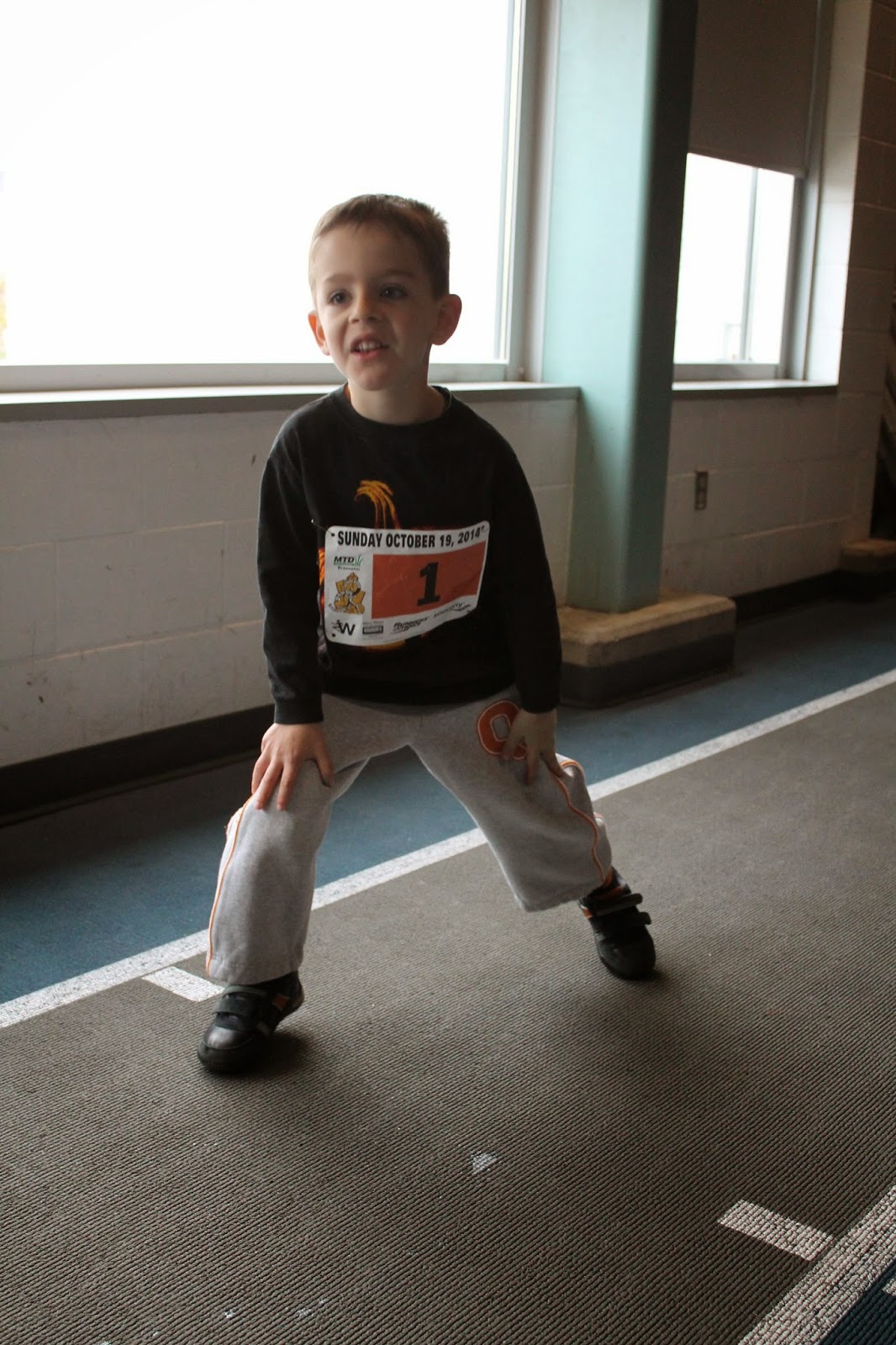 We also signed Sam and Rachel up for the Kids 400m Fun Run. Sam was super excited and made sure he was very warmed up. He also "ran the course" for practice a few times, just to make sure he knew what he was doing! Ha ha ha!!! 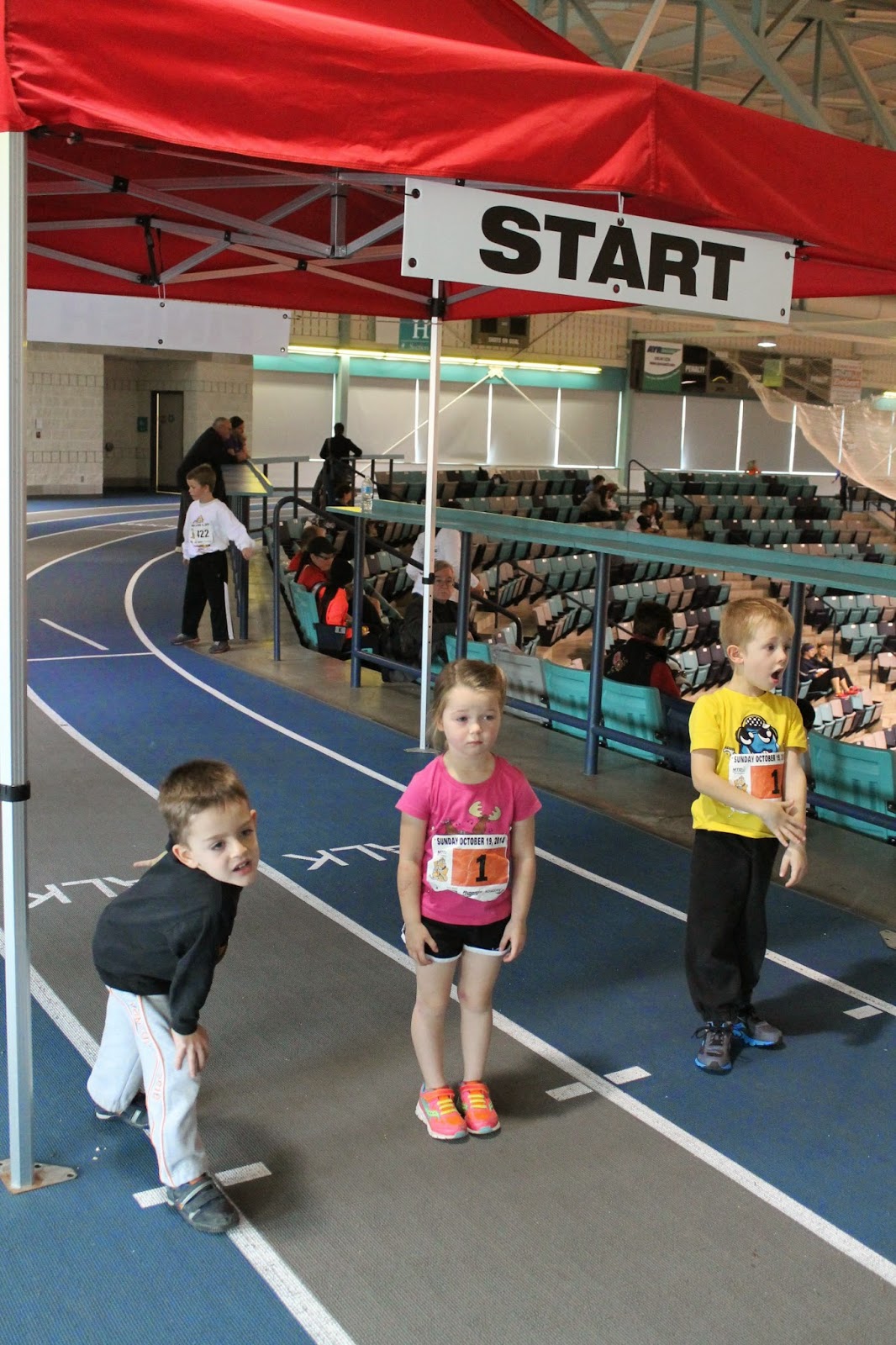 He wasn't the only kid eager for the run to start. This was about twenty minutes before it actually began. 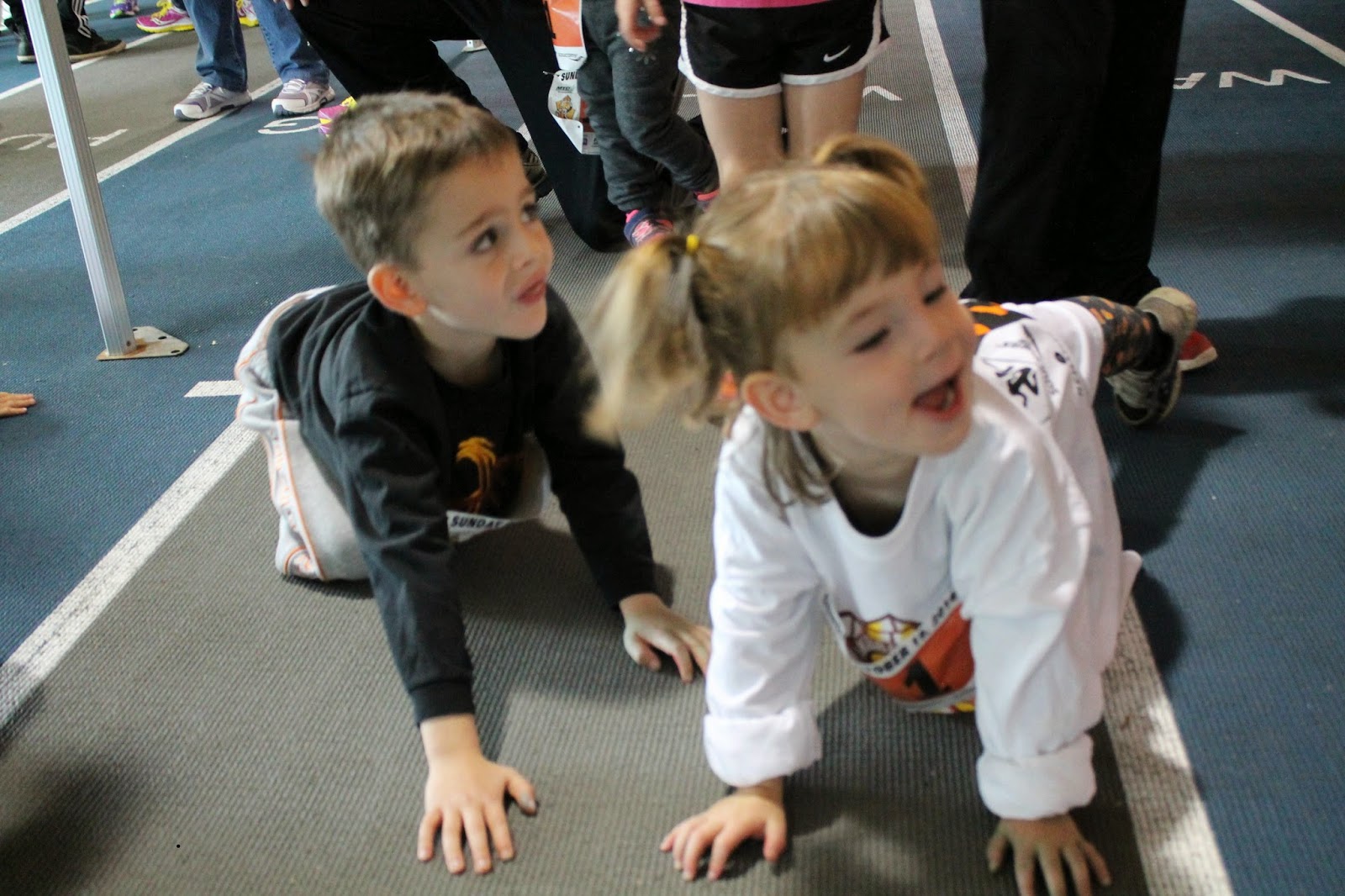 Sam and Rachel have obviously picked up some pointers and knew to get into the starting position. I was laughing really hard at this point so Dave had to take over picture taking duty. 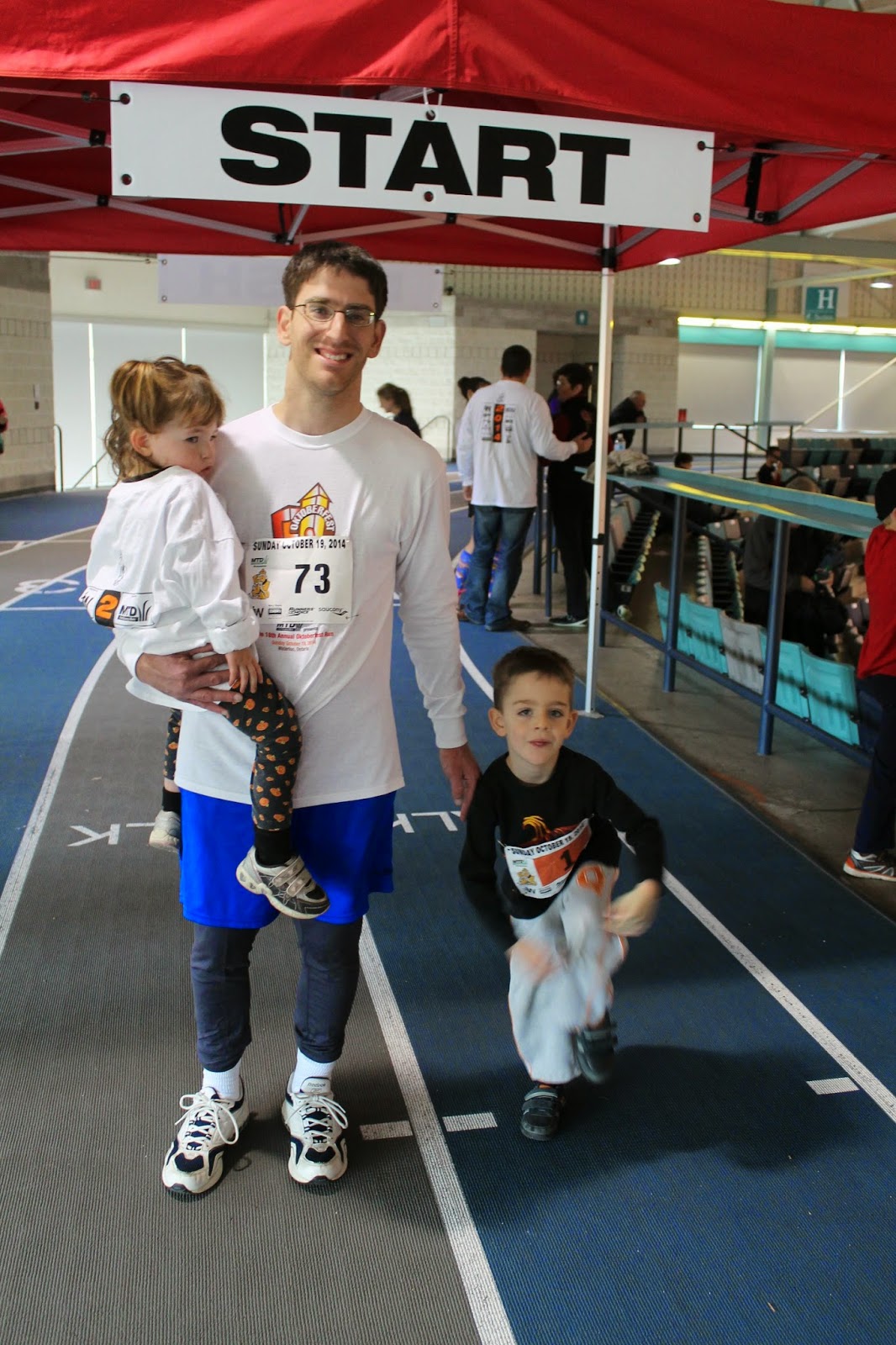 It was too crowded at the beginning of the actual run to get a good picture so I made Dave and the kids pose here afterwards. We had agreed at the beginning of the run that Dave would run with Sam and I would run with Rachel. This was Rachel's choice, by the way. Dave started off running with us until it was clear that Sam was way faster than Rachel at which point he took off after Sam. So for the next 300m Rachel was running, calling "Daddy, wait for me!", and crying her head off. I was laughing so hard I could barely run.

I was really proud of Rachel for continuing to run even though she was so upset Dave had left her. And Dave and I later declared that for Rachel it was the "Un-fun Run!"

I'm so proud of how well my family did in their various runs on Sunday. Maybe next time I will actually join them in a run of my own. Maybe...
Posted by Natasha at 08:21