To The Hedge Of Insanity 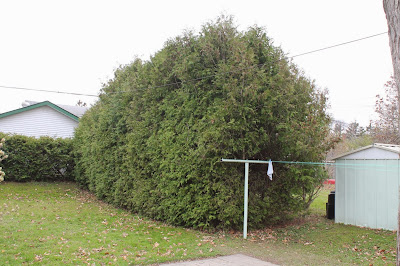 We have a really big cedar hedge in our backyard. It is probably over twenty feet high. The neighbours who we share this hedge with have told us that it is our responsibility. Dave and I were (are!) feeling a little overwhelmed by this hedge so we decided to cut it to a more reasonable height, like maybe seven feet high. A few (okay, about six!) Saturdays ago it was unseasonably nice out so we decided to get started. 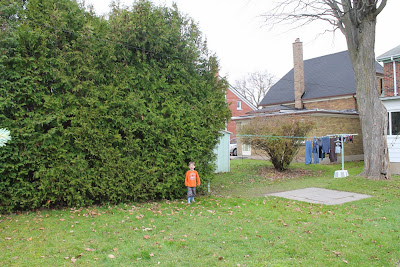 Can you even see Sam in front of this ginormous bunch of greenery?!?!?! 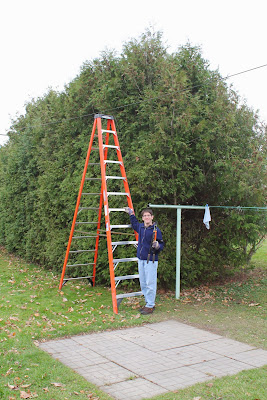 Dave and I took turns on the ladder with the loppers and a saw to get some of this growth trimmed away. The kids were quite excited about hauling the trimmings to the garage, at least at first. Although Dave and I were both quite impressed that the kids managed to be (mostly) entertained for the entire three hours we were out there. And yes, we intentionally had Rachel skip her nap. That was a bold move. 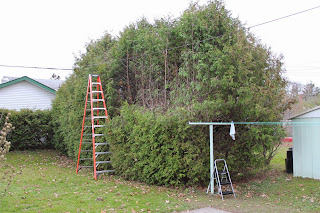 We only did about a quarter of the hedge and it took us close to three hours to trim and process it all. I think next spring we will call some friends together for a hedge trimming party. Are any of you in?!?!?! (And yes, we know this looks ridiculous but we wanted to at least get started.) 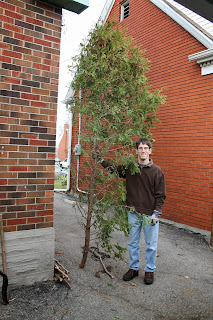 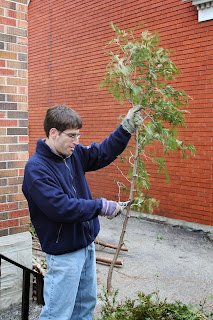 Dave is holding one of the pieces we trimmed off. And he is almost six feet tall. 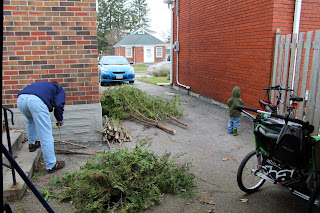 We trimmed the greenery off to be saved for Christmas decorating and prepared the rest for yard waste. Unfortunately, the processing took the longest and was the most not-fun part. Unlike the part where we were hanging onto the ladder for dear life and attempting to saw the bigger branches down, all the while hoping they wouldn't land on the power line. That was fun!

Speaking of "fun," and the "edge of insanity," we had a freezing rain warning for three whole days this past weekend and the worst of it hit Saturday night/Sunday morning, covering most of our area in a layer of ice. We woke up yesterday and debated about whether to go to church or not. We eventually decided to go because, due to illnesses and vacation, we hadn't been in six weeks which is Way. Too. Long. And I am really missing my church family. Also, our power went out and it seemed like a clear sign to not be at home. And then we got there and church was cancelled. So we went to the mall instead.

We had breakfast at Starbucks, mailed our holiday New Year's cards (ha!), and then we shopped at Target. We ended up buying some fun Christmas stuff on clearance, an owl suitcase for Rachel (because we'd been thinking of getting her one and we couldn't resist her "Rachel owl backa-packa, peese?"), and a few DVDs. Then we picked up pizza for lunch and came home. I ventured out to take pictures, as seen below, to document the beauty of the ice, and then our power came back on. Yay!!!

We spent the rest of the afternoon decorating our Christmas treeS (!!!) and meeting Dave's family for supper. And dodging the mini ice bombs which were falling from above as the weather warmed up a little. Fun times! And now I'm off to call a tree trimmer (as probably every person in our city is today) because one of the branches broke on our big tree in the backyard and is wedged among other branches. We're not braving the backyard until that thing is gone. Thank goodness I'd already thrown in the towel on hanging out laundry anymore this season :) 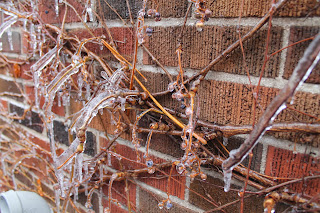 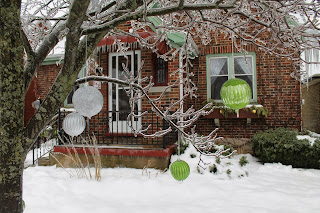 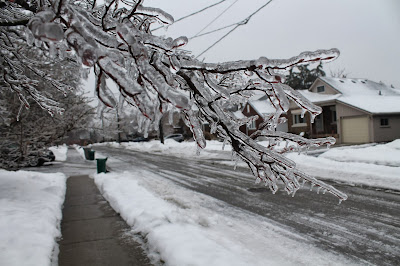