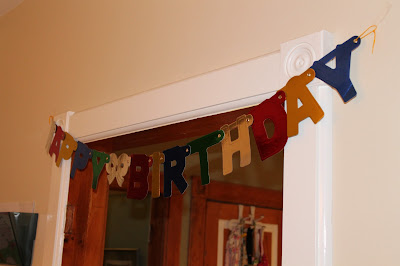 Dave turns 31 this coming Thursday. A couple of weeks ago I sent an e-mail out to some friends. To send the e-mail I used an account I had set up solely to blog from when I was having picture storage issues. It was an e-mail I knew Dave would NEVER check! Ha ha ha! This was the e-mail I sent:

Dave is turning 31 on January 17th and since we were in Edmonton for his 30th birthday we didn't have a party for him. I thought it would be fun to surprise him with a birthday party this year. I have decided that Saturday, January 12th works best. Hopefully you can all make it. Feel free to show up anytime after 4pm that day and stay as long as you want to. You don't need to worry about bringing anything unless someone has a GREAT idea of something small to bring. One year we all gave Dave a box of Crispix and for our "party to end all parties" he got bottles of beer from people. So if you think of anything small like that which you think Dave would appreciate you can share it with all of us. Or I'll try and think of something too.

Once the e-mail was sent I needed to make arrangements. So I enlisted the help of Donny and Marika to help with the subterfuge (good word, eh?!). They agreed to come into town yesterday so that Donny could take Dave out for a birthday outing and Marika and I could "work on a Pinterest project together!" Good reasons, eh?

Then last weekend Dave decided he wanted to invite some friends over for a birthday party this coming weekend. Thankfully he had the same guest list as for his surprise party so I sent the following e-mail to our friends:

So Dave decided tonight that he wanted to have a friend party for his birthday and asked if it might be possible to have it on January 19. Ha ha ha!!! Little does he know. So I told him I would arrange it. Thankfully his guest list was the exact same as for his surprise party on Saturday. So I'm going to send out an e-mail from my real account with an invite to a FAKE party for Dave on January 19. Respond to it as you wish but know that there is only ONE party and it is THIS Saturday, January 12.

We're looking forward to seeing everyone and I can't wait to see Dave's face when he realizes this was in the works all along. Ha ha ha!!!

I think the planning of the fake party was the funniest thing of all. It was super-crazy trying to keep Dave from finding out about the surprise party while at the same time planning the fake party with him. Plus I'm just not good at keeping secrets from Dave and this was a huge one which I couldn't share with him. I'm shocked I didn't just blurt everything out ahead of time :)

Thankfully it all worked out and I think Dave was quite surprised. Marika was amazingly helpful and did all the party preparation things I normally would have gotten Dave to do. Plus she made an awesome ginger-lemonade that I could keep drinking forever.

I was so busy during the party that the only pictures I took were of Dave blowing out the candles on his birthday cheesecake. 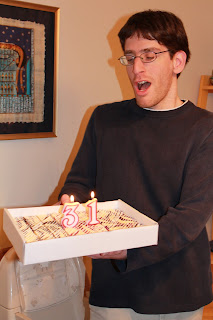 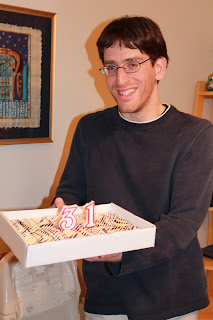 And that "something little" I was trying to figure out hit me out of the blue one morning. Dave has been doing the "Couch to 5K" 9-week running program and has been on week nine for awhile. I figured he could use new running music so I asked everyone to bring a song for Dave to run to. We got everything from "Lucas the Lazy Lion" from almost one-year-old Patrick to "Dynamite" by Taio Cruz from Willem and Tessa to "Born in the USA" by Bruce Springsteen from Dave's mom.

I gave him "Runnin' Back to Saskatoon" by The Guess Who. Sam gave him "With A Little Help From My Friends" by The Beatles and Rachel gave him "Splish Splash I Was Takin' A Bath" by Bobby Darrin. I think Dave will enjoy his really random new running music.

Thus ends Part 1 of Celebrating Dave's Birthday the 2013 edition.
Posted by Natasha at 20:55