Sorry about two blog posts in quick succession but I was too tired to post about Dave's party last night and today has been an INSANE day so I couldn't post either post earlier today. Just think of it as extra exciting to get two blog posts in a row. And I really promise not to do this too often. 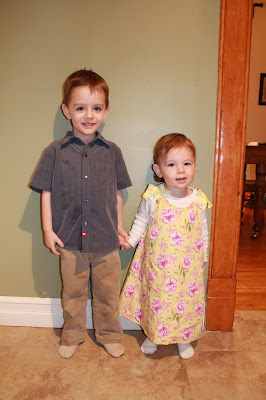 I really want to try and make Hymn of the Week (with a picture of my kids dressed for church (even if it's taken after supper! Ha!)) a regular thing again. So in an attempt to do that I am posting the following reflections on "I Sing The Mighty Power of God" which we sang in church this morning. (Note: I didn't actually sing it as I was in the nursery with Tessa and a bunch of moms came in and we talked about our birth stories. It was awesome fellowship time! But I digress...)

The words to the hymn are found here and this is some of what my book has to say about it. This hymn was written by Isaac Watts and there was much controversy as Watts' hymns began to replace the sung Psalms. He suffered a breakdown at one point and asked his church to discontinue his salary. Instead the church raised his salary and hired a co-pastor to do a lot of the work. (Amazing hey?!?)

A wealthy couple from the church invited him to visit their estate and he accepted. He ended up living there for the rest of his life. While there he published Divine and Moral Songs for Children. It sold 80,000 copies in a year and still sells today. (I think you can download it from here. Crazy!!!) "I Sing the Mighty Power of God" was originally intended for children but became popular with adults. I know many people today who love this hymn, including me.

And this picture of Sam (with his spiky hair due to playing too near the high chair and coming into contact with Rachel's tuna casserole fingers) and Rachel (wearing the dress I made her on Friday -- thank you!) totally makes me laugh (and melt because THEY'RE HOLDING HANDS!!! So sweet!) so I'm ending with it. May we worship God with the boundless joy of children, whatever we happen to be singing. 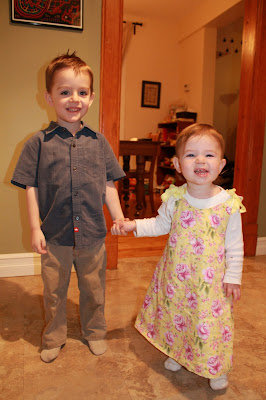