My Teeth Are So White I Gotta Wear Shades 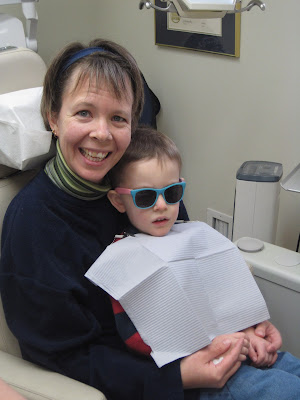 (EDITED TO ADD: I don't normally change the titles of my posts after I post them but this title came to me and it was so perfect I HAD to change it. And Dave was okay with it. Dave suggested the original title of "A Year And A Half Of Archaeological Digging" because he said that's what it felt like they were doing with all the scraping off of plaque they had to do for all of us!)


Today we all went to the dentist. Well, except for Rachel. I hadn't been to the dentist in almost two years, and I think it had been almost as long for Dave. Sam has only ever seen a dental hygenist once. I don't like going to the dentist -- it's uncomfortable, the polish tastes funny, the dental floss is mint flavoured and there is always the fear that I may have to return in short order for still more dental work. It's never a pleasant experience for me.

Dave took Sam and Rachel for lunch while I was having my appointment so at least I was somewhat relaxed during it. Then it was Sam's turn. He completely freaked when he heard it was time for him which surprised me since his preschool has been learning about teeth, the importance of toothpaste and even visited a dentist's office last week. I think Sam was scared though when it was his turn. So I got to go in the chair again. This time I had to be brave for Sam.

The picture shows Sam with the dental apron/bib, sunglasses to protect his eyes from the bright lights, and me with a worried look about how things were going to go. Despite my misgivings, Sam did wonderfully! He opened his mouth wide and even started talking a bit. And he let go of my hands eventually. He got a toy at the end and the dental hygenist and the dentist told him how awesome he was doing which helped.

So there you have it -- we've all survived Sam's first trip to the dentist. Next it'll be Rachel's turn but fortunately I have about a year to gear up for it. I think I'll need it.

Oh, and my teeth got a clean bill of health. There are a couple of teeth they want to keep an eye on but I don't have to go back until next year. Double yay!!!
Posted by Unknown at 18:28

Labels: Sam, We Are Healthy (Or Not)