There's Not Much Cuter Than An Elephant Holding A Bottle 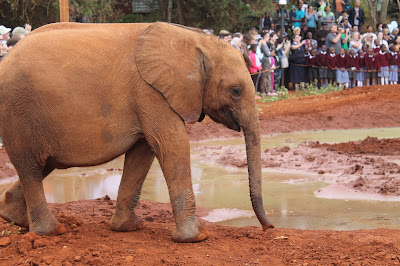 We had about a day in Nairobi at the beginning of our trip and then two days in Nairobi at the end of our trip. On our second last day in Kenya, we got to experience two amazing things. The first one was going to the elephant orphanage. (The second thing you'll find out about tomorrow!).

The elephants are rescued from all over Kenya. Sometimes they've gotten separated from their herds. Sometimes they've lost their mother to poaching. And sometimes the baby has fallen down a well and the rest of the herd can't get them out. I think those were the three main reasons babies ended up at the orphanage. 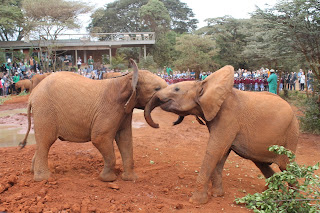 The elephants we saw on safari were very grey. These ones were red from rolling around in the dirt all the time. I have no idea what colour they actually were :) 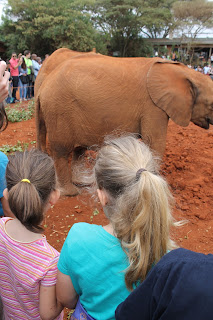 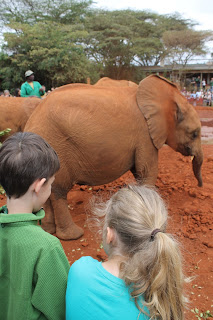 There was a rope separating the people from the elephants but if the elephants walked near you, you could pet them. Not many elephants came to our side of the area but I did get to briefly pet one. It was pretty cool. 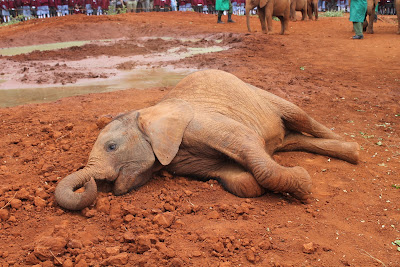 Did I mention they rolled around in the dirt a lot?!?! 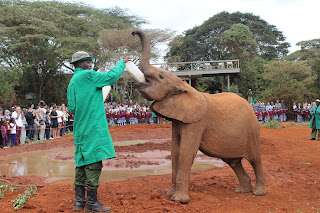 First we saw a group of about fourteen or fifteen babies. I think they were under a year and a half old. Then the second group of elephants came out. They were maybe eighteen months to about three years old. 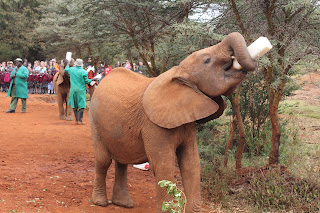 These elephants started their time with us by each getting two full bottles of milk. Sometimes the keepers had to help them out but other times, the elephants would just grab the bottle and go for it. 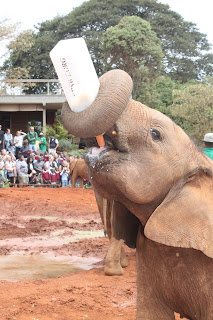 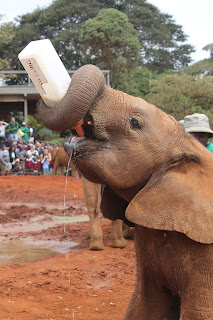 Can you see the milk dripping out of its mouth and on its eyelashes?!?! I have about fifty pictures of the elephants feeding themselves because I thought it was adorable.

At the end one of the elephants decided to challenge some of the humans to see who was more dominant. One of them put his head down and walked right into Sam's chest with his forehead. He knocked Sam back a step or two but Sam stood his ground. Seeing he wasn't going to win dominance over Sam, he proceeded to knock over three other kids. They weren't hurt, and it's one of the warnings you get about standing near the ropes. Sam thought it was pretty funny and, after I knew he was okay, I also thought it was hilarious. So if you want to take on Sam just know that an elephant couldn't take him down. You have been warned :)

If you want to know more about this orphanage and the amazing work they do, including releasing the orphans back into the wild, go check out their website here: http://www.sheldrickwildlifetrust.org/

*You can read about the rest of Day 12 here. This is the last post I wrote about our trip. On Day 13, Carla and I visited a few places where she volunteers. Dave stayed home with the kids, who all played. Then we left that evening :( We were so sad to go.
Posted by Natasha at 07:29