It'll Always Be The Skydome To Me 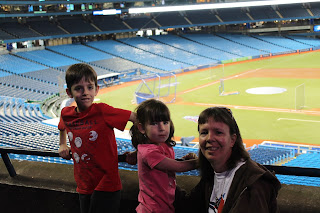 One of the things we've been wanting to do for awhile is take the kids on a tour of the Rogers Centre Skydome, the home of the Toronto Blue Jays. We found out that the dome was unnamed for quite a few years and then they had a contest to name it. Over 2,000 people suggested "The Skydome" -- due to the fact that the roof retracts and opens up (which is the best way to watch a ball game, by the way).

They put all the entries with Skydome in a draw and the winner got two free tickets for life to every single event held there. Yes, the winner can go to Blue Jays games whenever they want. And concerts. What an amazing prize!

However, a few years ago, Ted Rogers bought The Skydome and renamed it The Rogers Centre. I have an issue with rich people being able to throw their name all over things although Dave reminds me that Wrigley Field and Fenway Park were also named after people, we just don't remember that.

Anyways, this all goes to say that I still call it The Skydome because it is the coolest name ever. And 2,000 people (or more) agree with me. 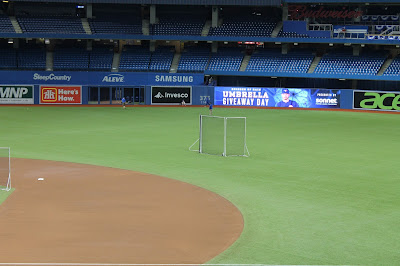 We picked Good Friday to do our tour because we were going to our first Blue Jays game of the season the next day and we stayed overnight with friends. As there was a game scheduled for later that day, we got to see some practicing going on, which was pretty cool 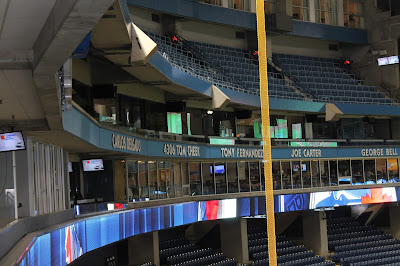 This is the Level Of Excellence and they are all Blue Jays players except for Tom Cheek. He was a longtime Blue Jays radio announcer and the number beside his name, 4306, is the number of games he broadcast without missing a single one. You all know how we love listening to the Blue Jays on the radio and we are so thankful for our Blue Jays radio voices -- Jerry Howarth, Joe Siddall, and Mike Wilner. 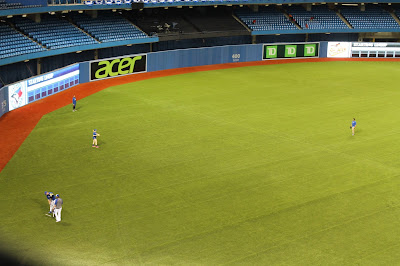 We got to check out the radio announcer's booth (although it was a secondary one, as the main one was being used for that night's upcoming game already). There are a bunch of really neat seats to watch the game from in The Skydome. Maybe someday we'll have to migrate down from the 500 level (the cheap seats)! Ha! 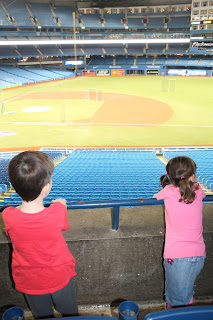 Every time we go to a Jays game, the announcer welcomes someone to the Jays Care Community Clubhouse. Supposedly this tradition started back when Roy Halladay pitched for the Blue Jays from 1998 - 2009. From Wikipedia: "While he was a member of the Toronto Blue Jays, Halladay and his wife invited children and their families from the Hospital for Sick Children into 'Doc's Box' at Rogers Centre during Blue Jays games." The Blue Jays have continued this tradition, not just with sick kids, but also with underprivileged kids who wouldn't have a chance to attend ball games otherwise, and it's a two piece luxury suite with serving tables at kids' levels and a cool baseball glove chair.

We are so thankful that we can take our kids to ballgames and know that it's not something every family can do. A few years ago, for his birthday donation, Sam raised over $150 to donate to the Jays Care Foundation, which supports the Community Clubhouse among other things. 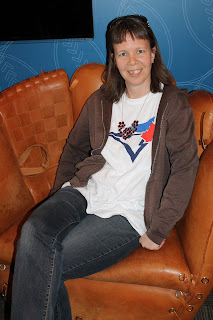 It was so fun to get an inside look at The Skydome and find out about some things we hadn't known before.

And since then, we've been able to attend two games. One was on April 15 against the Baltimore Orioles. The Jays won with a walk off home run from Kendrys Morales so that was very exciting. And the kids ran the bases afterwards. 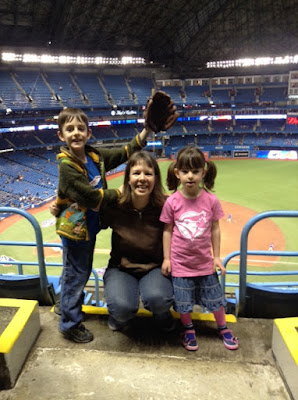 Sadly, it was kind of cold so the dome was closed. And please note, Sam always, with a great deal of hope, brings his glove, but since, as I mentioned, we sit way up in the cheap seats, a ball has never come near us. But he keeps bringing it! 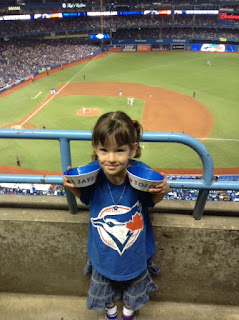 Every Saturday the Jays host Jr Jays Saturdays where they have games set up for kids, 14 and under. This past Saturday Rachel won not one, but two, cereal bowls, which was really exciting. The kids have also won about fourteen key chains and seven bookmarks. A few years ago they each won a place mat which they use almost daily. And this past weekend, Sam won a scoring place mat, where you can keep score of the game with chalk as you listen. This was basically the perfect prize for Sam.

If you've been reading here for any length of time, you know we love our Blue Jays. We always have a good time when we go, and we love our annual tradition of going with friends, with our care group, and as our own family of four.
Posted by Natasha at 06:23

Labels: All About That Base(Ball), Birthdays, Ontario - Yours to Discover, Rachel, Sam