The T-Ball Weekend What

This past weekend was fairly T-ball focused. Sam has been playing in a league this spring and this past weekend was the wrap up. First was the party on Saturday for the entire league. It was hot and noisy and they messed up Sam's pictures (they put a different kid with Sam's name) so we don't have his trading cards (boo) or his team photo with his individual picture.

However, there was a great children's entertainer and Sam and Rachel enjoyed the bubble machine. 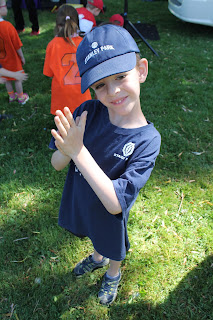 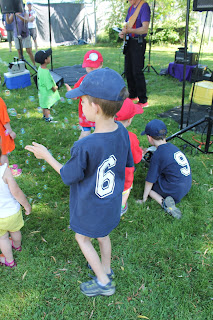 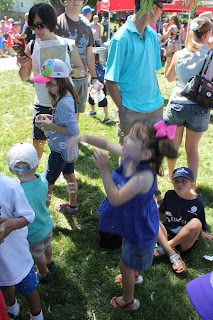 After we had recuperated from that for a little bit we went to our pool. Rachel dunked her head twice and earned a treat. Sam refused to dunk his head, but he did deign to be in the pool for longer than normal (five minutes as opposed to thirty seconds). Both Dave and I agree that swimming is a life skill so it's going to be a long fun summer. 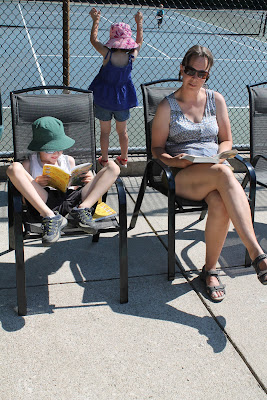 Sam was much more excited about the post-swimming tennis with Dave and reading. 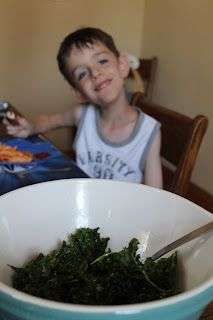 This is a blurry picture of Sam but I made the first kale chips of the season and they needed to be celebrated. And yes, we ate them all at supper. 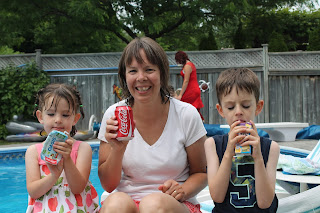 On Sunday we went to Sam's T-ball coach's house for a team pool party. We had so much fun! Sam enjoyed playing in the water with his friends, and Rachel got brave and "swam" short distances between Dave and I. After the pool time we needed a refreshing drink. 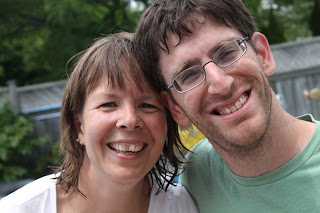 And this picture of Dave and I was taken by Rachel with our DSLR. She's turning into quite the photographer, as well as quite the swimmer. Seriously though, I think this may be my new favourite picture of the two of us.

The rest of the weekend was spent listening to/watching the Blue Jays play and tidying/organizing the house. It was great weekend!
Posted by Natasha at 07:41